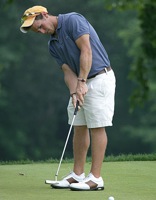 May 6, 2009 — The Golfing Union of Ireland won five of six singles matches on Wednesday, May 6 and retained the Governor Hugh L. Carey Cup by a final score of 8 ½-3 ½ at the Portmarnock Hotel & Golf Links in Dublin, Ireland. Joe Saladino of Huntington was the lone bright spot for the MGA as he halved his match against Paul Cutler. The teams had entered the final day of competition tied at 3-3 after the foursomes and fourball matches on Tuesday, May 5.

The situation looked bright early on for the MGA as Saladino, the 2008 MGA Jerry Courville Sr. Player of the Year, halved the first match of the day against Cutler. Mike Reardon of Tuxedo and Greg Rohlf of Winged Foot played well in their matches, but both lost by 1-up margins to Rory McNamara and Alan Dunbar, respectively. The momentum continued to build for the GUI as Ed Gibstein of Engineers, playing on his ninth MGA international team, was unable to overcome the strong play of Paul Dunne and lost, 2&1. Robert Cronheim of Twin Brooks in Watchung, N.J., who was one of the MGA’s top performers on the first day of the competition, lost his match, 2&1, to Andrew Hogan. Cameron Wilson of Shorehaven was unable to contain the hard-charging Dara Lernihan and lost, 6&5.

The Carey Cup matches were inaugurated in 1996 by former New York State Governor Hugh L. Carey as a way to stimulate sportsmanship and good will between the U.S. and Ireland. The event is a reincarnation of the Metedeconk Challenge, which was played in 1990 and 1992 and matched teams of Irish and American amateur golfers in a Walker Cup-style competition. This year’s event marks the eighth playing of the Carey Cup. The field consists of six-man teams of amateur golfers representing the Metropolitan Golf Association and the Golfing Union of Ireland.

The first day of play at the Carey Cup matches saw an MGA team veteran and rookie rise to the occasion at Portmarnock. Mike Reardon is on his fourth MGA international team and Robert Cronheim on his first, but both played at the top of their games as the MGA and GUI finished the first day of competition tied at 3-3. The day featured foursomes in the morning and fourball matches in the afternoon.

In the foursome (alternate-shot) matches, team captain Gene Westmoreland paired the young Cronheim with Reardon in what turned out to be the hottest pairing of the day. Cronheim and Reardon defeated Cutler and McNamara, 2&1, to earn the only MGA point of the morning. In the other matches, Rohlf and Joe Saladino were beaten, 1-up, by Hogan and Dunbar. The sixteen-year-old Wilson teamed up with Gibstein, but they were unable to overcome Dunne and Lernihan and lost 2&1.

The MGA gained some ground back in the afternoon fourball matches as Westmoreland shook up his last two groups. Rohlf and Saladino played together again in the afternoon, but were unable to take down Lernihan and Hogan and succumbed 4&3. It was the play of Cronheim and Reardon, this time with different partners, which propelled the MGA team into a tie with the GUI. Cronheim joined forces with Gibstein to beat the GUI duo of Dunbar and McNamara, 2&1. Just behind them on the course were Reardon and Wilson, who were in the midst of a commanding 3&2 victory over Dunne and Cutler to even the score after the first day of competition.