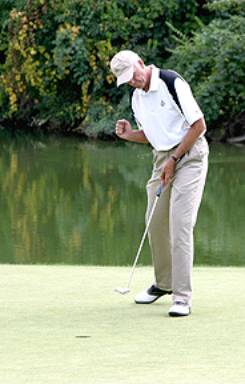 WAYNE, N.J. (September 9, 2009) – First-round leader Al Small of Fairmount was determined not to let the 82nd MGA Senior Amateur Championship slip away from his grasp, and at the end of an exciting day at Preakness Hills Country Club, he more than accomplished his goal.

Small, who is also the reigning NJSGA Senior Amateur champion, shot a final-round 69 to go along with his first-round 72, finishing at three-under 141 and earning a seven-stroke victory over Steve Rose of Fresh Meadow, Tom Graham of the Country Club of Fairfield, and Jay Blumenfeld of Mountain Ridge.

“Anytime you can shoot 69 in the last round, playing in the last group, it’s just part of what makes this game so great,” said Small. “I hit a few more wayward drives today than I did yesterday, but I was hitting my 3-wood great today, so that helped me down the stretch.”

The 6,560-yard, par-72 Preakness Hills Layout played difficult throughout the two-day championship. Small was the only player to shoot a sub-par round, and swirling winds made approach shots even more of a test.

Small bogeyed the first hole today but then birdied the seventh to make the turn at even par, where he started the day, and at that point was clinging to a one-stroke lead over Rose and Blumenfeld. He then bogeyed the short par-four 11th to fall back into a tie for the lead, but birdied the very next hole to regain the edge that he would not relinquish. Small then displayed the form of a champion, finishing his round eagle-birdie. The eagle on the par-five 17th came in the form of a 66-foot putt from just off the front edge of the green.

Small, who turns 58 on Thursday, is currently serving as MGA president, and made no secret of how much he wanted this victory. “Sometimes you can want something so much that you choke it away,” he said. “But the last month or so I’ve been playing some of the best golf of my life. I’m so happy to be able to win this championship.” Small becomes only the second sitting MGA president to win a championship during his term, the other being Joe Donohue, who captured the 1982 MGA Senior Amateur at Ridgeway Country Club in White Plains, N.Y.

Immediately after the awards ceremony, Small and his good friend Blumenfeld headed off to Newark Airport to catch a flight to Chicago, where they will be among six Met Area players to compete in the U.S. Senior Amateur at Beverly Country Club. Both Small and Blumenfeld have high hopes for a good showing in the national championship.

Tying for fifth place at five-over 149 were defending champion Ron Vannelli of Metuchen and Donald Hendler of Meadow Brook. One stroke behind them at six-over 150 were 2004 MGA Senior Amateur champion Doug Vergith and David Pilossoph of Split Rock.