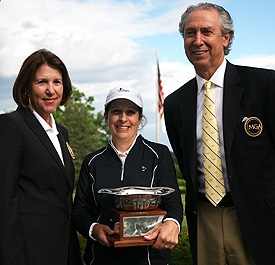 GREENWICH, CONN. (June 5, 2012) – On an unusually chilly June day, 75 women from across the Met Area competed in the 11th WMGA/MGA Met Amateur Championship at the spectacular Stanwich Club, one of the premier courses in the country. Between the wind, occasional showers and lightning-fast greens, tournament experience was a key component to success, and 2010 champion Laura Algiero of Whippoorwill triumphed on the third hole of a sudden-death playoff to win her second Women’s Met Amateur title.

Algiero was tied at the end of regulation with recent St. John’s University graduate Ellen Oswald of Westchester Country Club. Both women shot scores of 4-over 78, which turned out to be two strokes clear of their nearest competitors on a day when many talented players, including 2008 champion Barbara Israel, found trouble around the difficult green complexes at Stanwich. The course played 5,686 yards to a par of 74.

“I actually putted well,” said a happy Algiero afterward. “I hit 13 greens in regulation and only had two three-putts, which I thought was excellent on these greens. And I birdied both par threes on the front nine, so that helped quite a bit.”

Oswald finished nearly an hour before Algiero and waited to see if her 78 would hold up. The 2012 graduate of St. John’s University is yet another in a long line of impressive Met Area players who represent the Red Storm women’s and men’s golf teams well in tournament play.

On the first playoff hole, the dogleg-left, par-four first hole at Stanwich, Algiero’s approach trickled just onto the back
rough of the green and left her a very fast downhill putt, while Oswald pulled off an impressive chip from the left of the green and drained her 7-foot par putt. Algiero also got down in two, and the players continued to the uphill 18th hole for the second hole of the playoff, where they halved yet again after both players lipped out short putts.

Algiero took that disappointment and focused on hitting two good shots as the players returned to the first hole to continue the playoff, and that’s exactly what she did. After Oswald hit it over the green with her approach, Algerio calmly two-putted to beat her younger and longer-hitting opponent.

“It feels awesome,” remarked Algiero. “I’ve played with Ellen before and I know how she hits the ball, but I’m always the shorter hitter and I just play my game. I don’t let it bother me that I get out-hit. It doesn’t matter, because my short game is pretty good and I capitalized today when I needed to.”

This is the first year of a new partnership between the WMGA and MGA on this event, and the organizations will also partner on the MGA Mixed Pinehurst Championship, held in September. WMGA President Beth Post and MGA Executive Director Jay Mottola were on hand to present the trophy to Algiero.