UPDATED-4:39 P.M. 8/7/13 - The Met Area locals in the U.S. Women's Amateur have all completed their opening match at the Country Club of Charleston in Charleston, S.C. and each of them advanced into the round of 32.

Securing her spot in the next round first was Nicole Morales of South Salem, N.Y., winning her match 2 and 1. She will play tomorrow at 8:20 a.m. against 20th seed Casie Cathrea of Livermore, Calif.

Also moving on to the second round was Pac-12 Player of the Year Annie Park of Levittown, N.Y. She will move on to play the 5th seeded Brittany Fan of Pearl City, Hawaii tomorrow at 8:30 a.m after winning her first match with ease, 4 and 3.

The lowest seed of the three players was Kelly Shon of Port Washington, N.Y. after her stellar 36-hole stroke play qualifying performance. Shon was pushed to the brink in her opening match but managed to squeeze into the second round after winning her match 1 up. She will play tomorrow at 8:40 a.m. against 44th seed Meghan Stasi of Oakland Park, Fla. If both Shon and Park win their next matches, they will face each other tomorrow afternoon in the round of 16.

UPDATED-9:30 a.m. 8/7/13 - The match play portion of the U.S. Women's Amateur Championship begins today and three of the Met Area's best female golfers made it into  the final 64 player bracket. After two rounds of stroke play qualifying it was Kelly Shon of Port Washington, N.Y. leading the way for the locals with rounds of 74 and 68 for an even par total of 142 at the Country Club of Charleston in Charleston, S.C. Shon is the 12th seed and will play today at 11:50 a.m. against the 53rd seed Gabriela Lopez of Mexico.

Finishing her stroke play qualifying rounds a shot behind Shon was Nicole Morales of South Salem, N.Y. Morales shot rounds of 75 and 68 for a 1-over total of 143, securing her spot as the 13th seed. She will play the 52nd seed Liv Cheng of New Zealand today at 11:10 a.m.

Also qualifying was Annie Park of Levittown, N.Y., finishing two shots back of Morales with rounds of 74 and 71 for a 3-over total of 145. That would be good enough to get Park in as the 28th seed where she will face the 37th seed Lauren Stephenson of Lexington, S.C. today at 11:40 a.m. 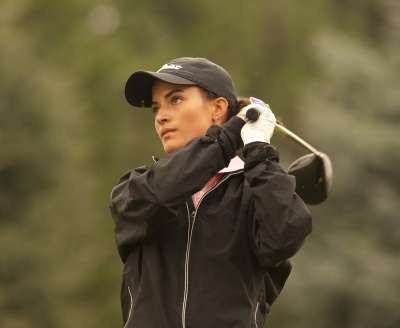 for The Cox Trophy at the Country Club of Charleston in Charleston, S.C. The championship will take place over the next seven days with 36 holes of stroke play qualifying followed by a 64-player match play bracket to crown the champion.

Headlining for the Met Area is Annie Park of Levittown, N.Y. Park competed in the U.S. Women’s Open for the second straight season as an amateur this past June, but it was what she did at the University of Southern California that made everyone take notice. She joined the Trojans Women’s golf team this past January and took the Pac-12 by storm in her freshman season. Park led USC to its third NCAA Team title and won four individual events along the way. Not only did Park win Pac-12 Freshman of the Year, but Pac-12 Player of the Year as well.

Joining Park at USC this fall and playing this week is Karen Chung of Livingston, N.J. Chung is currently No. 10 in Golfweek’s Girls Junior Rankings and is also a 3-time AJGA First Team All-American. She played in the 2011 Junior Solheim Cup and went undefeated in her 2012 Junior Ryder Cup matches.

Annie Park is not the only Met Area local in the U.S. Women’s Amateur to make noise in her respective college conference. Kelly Shon of Port Washington, N.Y. is entering her senior year as a member of the Princeton golf team. Shon is coming off her Ivy League Player of the Year season and is also a WGCA All American. She also played in the 2011 U.S. Women’s Open where she missed the cut.

Another Met Area junior with hopes to make her presence felt this week is Nicole Morales South Salem, N.Y. Morales is coming off her win at the Thunderbird International junior and is currently No. 3 in Golfweek’s Girls Junior Rankings. She will be head to the University of Alabama in the fall of 2014 and will play on the Junior Solheim Cup later this year.