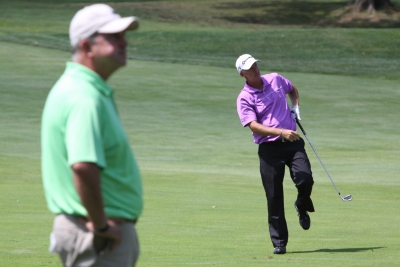 Thomas' final round round 4-under 67 performance came in breezy conditions and set several Senior Open records, including lowest final round score (previously 69) and lowest 36 hole total (previously 137). He also became the youngest champion in the history of the competition at 50 years and 22 days, breaking the previous record set by Bruce Zabriski in 2007 by three days.

“It’s nice to come into the fall season this way,” he said. “The course played tough, the wind threw a whole other variable. Coming into the day in 10th or 11th place, I was just glad I gave myself a chance.”

Thomas, who last year won the Met PGA Lincoln Pro-Am, got off to a blazing start, shooting a 3-under 33 on his front nine. A birdie on the par-5 18th secured a total of 136 and he’d have to wait for Mielke, who was in the final pairing, to finish.

Mielke, who shot a championship low 65 in the first round to lead by two shots, was able to overcome a double bogey on his 16th hole and make a clutch up-and-down birdie on 18 to force a playoff.

“I played a lot of golf with Mark over the years,” Thomas said. “For him to finish the last three holes at 1-over was very surprising. My clubs were already in the trunk.”

Both players birdied the par-5 1st hole but when Mielke, who tied for low club pro honors at the 2013 Senior PGA Championship in June, pushed his approach shot at the par-4 10th, he was unable to get up-and-down to match Thomas’ par. Mielke collected $2,500 out of the $25,000 purse for his runner-up finish. 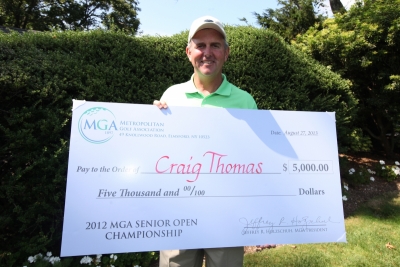 Mark McCormick of Suburban, 2005 winner Darrell Kestner of Deepdale, and Tom Sutter of Dunwoodie shared seventh place with totals of 141.

Celebrating its 100th anniversary this year, Sunningdale greeted players with flawless playing conditions for both days. The course, which played to a par 71 of 6,560 yards for the final round, features rolling Westchester County terrain and picturesque par threes.

The MGA Senior Open will visit Alpine Country Club in Demarest, N.J., in 2014. For full coverage, including photos and video interviews, visit mgagolf.org.