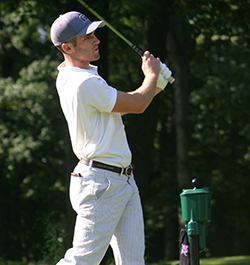 Bernstein of Century leading the morning wave after an opening round of 4-under 66. Bernstein, the Co-Ivy League Player of the Year, shot a pair of 33s on Montclair's third and fourth nines and failed to record a bogey the entire day.

"I didn't make any bogeys, which was nice. I hit a lot of greens, a lot of fairways, and had a lot of great looks at birdie," Bernstein said.

The 2011 Arcola Cup Champion had played one round in the past three weeks prior to today, so he was pretty happy with his round. "I've been traveling in Europe," Bernstein said. "I was just hoping to make the cut today, so it's nice to put up a good round." While Bernstein is happy with where he stands he knows there is a lot of golf left to be played. "I've led in these things before," the 22-year-old said," but you can't really think about today's round, you have to think about how you are going to get around the course tomorrow."

Just one shot behind Bernstein is the back-to-back NJSGA Amateur Champion and 2003 Met Amateur Champion Mike Stamberger of Plainfield. Stamberger carded a 3-under 67 with six birdies along the way. "I played consistently well and gave myself a lot of chances," Stamberger said. "We'll see, it's a long day tomorrow. This is a tough golf course to walk."

Al Small of Fairmount finished at even par 70 for the opening round, highlighted by an eagle two on the par-4 15th hole. "I'm happy with how I played," Small said. "I was wondering if I was even going to make the cut. You never know when you are going to play in your last Ike." The former MGA Senior Amateur Champion is hoping his legs hold up for the 36-hole day tomorrow. "I'm just worried about the second round tomorrow, I'm 62, and this is a tough walk," Small said.

Bernstein has a one shot lead for now, but a few others from the morning wave as well as the afternoon wave we'll be close behind. Both Brian Komline of Black Oak and Jonathan Renza of Mohansic each fired rounds of 1-under 69 and feel good going into tomorrow.

Keep following the live action at the 59th Ike by clicking here.