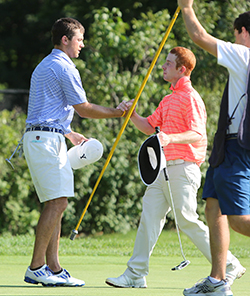 Club. The 22-year-old from Greenwich, Conn., who plays out of MGA eClub – Westchester / Fairfield fired superb rounds of 72, 69, and 67 for a 54-hole total of 2-under 208. Montclair Golf Club, a par 70, tested players with its quick and undulating greens and firm conditions. Pastore remained steady through the event, despite being six shots back of the leader after his opening round.

“I’ve been playing well and I felt good yesterday,” the recent University of Virginia graduate said. “I had one bad shot, made a double-bogey, and I was quickly 2-over.”

The 2-over 72 seemed to put Pastore a little behind after day one, but he knew he just had to keep playing his game. “Like I said, I knew I was playing well and I knew that some good scores were out there,” he said. “I just tried to tell myself that I got my high score out of me and thankfully I shot two under par rounds today.”

The 2010 Carter Cup Champion and two-time Met Junior winner can now add a fourth MGA Trophy to his collection. “I’ve kind of been absent from the MGA champion category the last couple of years,” Pastore said. “It feels good to finally be back in the winner’s circle.”

Pastore’s second round was steady, he shot a 1-under 69, but it was his final round that earned him the title. He got off to a hot start, birdieing four of his first seven holes, but then three bogeys set him back. It was a putt on the 15th hole, (one he three-putted this morning), that led to a strong finish.

“It was a really slippery birdie putt,” Pastore said. “I made it and made one more (birdie) on 17 to steady myself and save the round.”

He did more than just save the round. Pastore shot a stunning 3-under 67 to pass the two-round leader Sam Bernstein of Century for the victory. It’s been quite the year for Pastore and with this win it is arguably the best of his career. He qualified last week for the U.S. Amateur Public Links and also played in this year’s U.S. Open Sectional Qualifying round. It was an injury earlier in the year that actually ended up being just what the doctor ordered.

“I hurt myself in the fall and it gave me some time off to re-assess, make specific goals and kind of get everything in order,” he said. Everything seems to be coming into form for Pastore in what could be a huge rest of the summer. He plans to play in the final edition of the U.S. Amateur Public Links and then turn professional for the Met Open at Trump Bedminster in August.

Bernstein went low in the first round, firing a 4-under 66. His second round featured no birdies and four bogeys for a 4-over 74. The Yale graduate couldn’t fight all the way back in his final round, carding a 2-over 72 for a three-round total of 212 for solo second.

“Today was a little bit tougher,” the 22-year-old said. “I was hitting the ball nicely, especially in the second round today, the putts just weren’t dropping.”

Bernstein, a quarterfinalist in last year’s Met Am, hadn’t played much in the past few weeks but overall he felt it was a good way to start off his summer. He will play in the Met Am and Met Open this summer and plans on playing Pinehurst next week for the North and South Amateur. Bernstein will also tee it up in a U.S. Amateur qualifier and later in the year is going to Q-school in Europe.

Tied for third with matching scores of 3-over 213 were Brian Komline of Black Oak, who captured the 2010 NJSGA State Am at Montclair; 2010 MGA Boys champion Matt Lowe of Colonial Springs; and Danny Guise of Griff Harris, a rising sophomore at Wake Forest and a former teammate of Pastore’s from Greenwich High School.

Bryan Pendrick of Mill River kept himself in the mix throughout the event, shooting rounds of 72-71-71 to finish sixth with a 4-over 214.

Nick Dilio of Casperkill; Peter Van Ingen of Deepdale, the 1991 Met Am winner; and high school senior Thomas La Morte of White Beeches all had scores of 6-over 216.

Rounding out the top of the leaderboard with final scores of 217 were Conor Casey of Somerset Hills; Steven Zychowski of Mendham; and Mike Stamberger of Plainfield, the recent NJSGA Amateur winner.

The top ten finishers today are now exempt into this year’s Met Amateur at The Creek in Locust Valley, N.Y., as well as the 2015 Ike at Friar’s Head in Riverhead, N.Y.

The Ike Team champions, the two individuals representing the same club who have the lowest 54-hole combined total score, were Lloyd Jefferson Go and Bradley Lankler of Fiddler’s Elbow who had a combined score of 449.

Montclair Golf Club’s slick, challenging greens and tight fairways provided an excellent stage for the Met Area’s top amateurs as they took on the third and fourth nines for this year’s edition of the Ike. The hilly layout was a true test for the starting field of 129 players, of which 46 made the cut. This is the first time that the MGA has returned to Montclair for the Ike Championship since 2002, when three-time PGA TOUR winner Johnson Wagner was crowned the champion.

The Ike Championship, which began in 1953, is regarded as the Met Area’s premiere amateur stroke-play event. The 54-hole championship is played over two days, with the starting field cut down to the low 40 players (and ties) after the first 18-holes