STAMFORD, CONN. (May 6th, 2014) – Jay Blumenfeld of Mountain Ridge adds his name to the MGA Senior Amateur trophy again after he 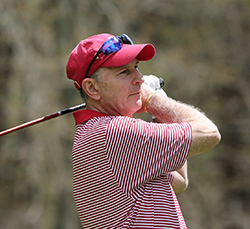 defeated the field by one stroke to win with rounds of 75-73 at Rockrimmon Country Club in Stamford, Conn. The 2007 champion started his final round with a couple of early birdies to get ahead, edging out David Prowler of Bethpage by one stroke. Blumenfeld’s 1-over 73 tied Prowler’s for the low round of the day.

Blumenfeld, who finished tied for ninth last year at Navesink, concentrated on staying close to par. “I started the back nine poorly and missed a putt for par on ten, but then played really well coming in,” he claimed. The 62-year-old had never played Rockrimmon before, but stayed ahead of the field today by focusing on staying in the fairways and making putts on the challenging greens. Blumenfeld is an accomplished player already, recently advancing to the Round of 32 at the 2012 U.S. Senior Amateur and missing match play by only stroke in 2013. He is the 18-time club champion at Mountain Ridge and his season is just getting started, he is preparing for the upcoming Travis Invitational and NYC Amateur.

Prowler’s runner-up finish came after sinking three birdies to make the turn at 1-under, putting himself in prime position for a top finish. A tough bunker shot on 18 led to a bogey and he finished 1-over 73, one shot short of Blumenfeld's total. “I have no regrets,” he said, “I just want to put myself in this position again, it is so much fun to put the pressure on.”

Finishing alone in third was Jay Sessa of Cherry Valley who co-led the field after the first round. A tough front nine caused him to finish with a 7-over 79, putting him at 9-over for the championship. 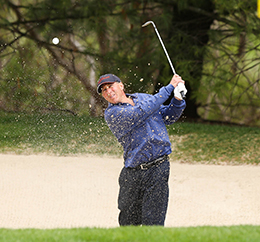 nickerbocker and Jon Groveman of the Connecticut Golf Club tied for tenth with 36-hole scores of 156, and last year’s winner Jon Tingley of Stanton Ridge was close behind them with rounds of 81-77 to be tied for twelfth with 2013 Runner-Up Cyrus Whitney Jr. of Hackensack and Tom Trakoval of Port Jefferson. Rockrimmon's own Drew Greenland made the cut and finished tied for 22nd.

Blumenfeld’s win earns him a spot in the Ike next month at Montclair Golf Club, the Mid-Amateur at his home course, Mountain Ridge, in October as well as the next five MGA Senior Open Championships. The top-ten finishers today are exempt into the 2014 MGA Senior Open at Alpine Country Club in August.

With clear and calm conditions for the final round, Rockrimmon played to a par 72 at 6,602 yards. This was the first MGA Championship that the course hosted, and it challenged the  49 players who made the cut with its excellent conditions and fast, testing greens.