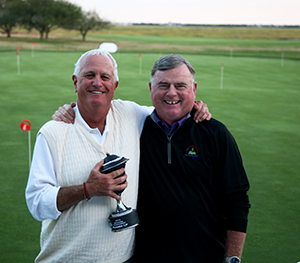 score of 1-over 71. The 2005 MGA Player of the Year added another victory to his resume after a round that included four birdies, edging out the 2013 champion Marty Winkelman of Glen Head by two strokes.

The 2012 and ’08 MGA Senior Am and 2005 Met Am winner had never seen Rockaway Hunt’s course prior to his round today, but he navigated it without trouble. “I just tried to hit it in the fairway and then hit the green, which always seems to work…if you can do it, and I did it pretty well today. Overall I struck the ball pretty well,” Vannelli said.

A year ago, it was Winkelman who beat Vannelli by one stroke to take the trophy at Apawamis. “I was looking forward to getting this [title], and today I finally did,” the champion claimed.

Winkelman held the early lead throughout most of the day, but a couple of bogeys late in his round kept him from taking home the trophy for the second consecutive year and he finished as the runner-up.

John Marchetti of Whippoorwill and Tom Graham of CC of Fairfield carded matching scores of 4-over 74 to tie for third place.

Three-time MGA Senior Amateur winner Steve Rose of Fresh Meadow (2010, ’05 and ’03), Richard Schmidt of Windwatch and Gary Cymrot of MGA eClub Westchester/Fairfield finished close behind with scores of 5-over 75.

Gary Cymrot was awarded First Low Net with his net score of 68. After a match of cards, Ken Strasnick of Trump – Hudson Valley took home Second Low Net over John Marchetti and Thomas McDonald  of MGA eClub – N.J., all who had net scores of 69.

In perfect weather conditions, Rockaway Hunting Club was a pristine backdrop for the group of 70 players today. The course layout challenged the golfers while providing beautiful water views. The seniors played the course at a par 70 at 6,067 yards.

The MGA Senior Masters is open to golfers who are age 65 and older. Next year’s tournament will be played at Echo Lake Country Club in Westfield, N.J.