(pictured on homepage) In 1987 at Winged Foot, David Glenz accepting his check for his low pro performance after coming in second to amateur Jim McGovern.

ELMSFORD, N.Y. (January 28, 2015) - Both the Metropolitan Golf Association and Winged Foot Golf Club have storied histories that will meet again this summer for a record seventh time when the 100th playing of the Met Open will take place on the club's East Course. As we continue to look back into history in the months leading up, today we take a look at Winged Foot, its championship history, and not only its role in hosting the Met Open but countless other MGA events over the years.

The Mamaroneck, N.Y. club opened in 1923, just 18 years after the first playing of the Met Open. Just ten years later in 1933 the championship was contested at Winged Foot, but it was not the first MGA event the Tillinghast course hosted. In 1926 at Winged Foot the 26th Met Amateur would be won by W.M. Reekie on the 38th hole of the match. Three years later it hosted its first U.S. Open, won by amateur Bobby Jones. The event would prove to be one of the most historic in golf history, with Jones capturing the title in a 36-hole playoff for his third U.S. Open victory. 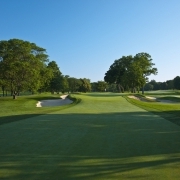 Since then it has hosted 10 more major championships, most recently the 2006 U.S. Open, which was won by Geoff Ogilvy at a whopping 5-over par. The course has a reputation of making even the world's greatest players struggle, and it will have another opportunity to do that in 2020, when it hosts its 12th major championship and sixth U.S. Open. Fuzzy Zoeller did what he could to prove that theory wrong in 1984, by winning the Open in a playoff over Greg Norman, at an outstanding 4-under par total. Hale Irwin was victorious in the 1974 U.S. Open at 7-over, winning by two strokes. 15 years prior Billy Casper claimed the Open at 2-over par, 30 years after Jones won the first Open played at Winged Foot. Aside from the five Opens, the club has hosted two U.S. Amateurs, two U.S. Women's Opens, a Senior Open, and a PGA Championship.

Sprinkled in between all the great major championships were numerous MGA events at Winged Foot. After its first Met Amateur and Met Open, the club hosted the MGA Senior Amateur in 1944, won by Samuel J. Graham for a second year in a row. Nine years later the Senior Am returned to Winged Foot and Thomas Robbins claimed victory. While 1953 was the last time the Senior Amateur was hosted by Winged Foot, the club was far from done hosting MGA events. The Ike Championship was played in consecutive years at Winged Foot in 1963 and 1964, and it returned in 1995 to be contested for the first time on the East Course in MGA history. Since 1926 it has only hosted the Met Amateur twice, most recently in 1971 when it was won by Richard Spears. Winged Foot also hosted the fifth playing of the MGA Intercollegiate Championship, an event that no longer exists. That year it was won for a fifth straight time by Princeton. And while the Met Open heads to Winged Foot for a seventh time, it is not the most recent MGA Championship to be played there. That came in 2005, when the Carter Cup made its way to Westchester instead of Baltusrol, due to its hosting of the 2005 PGA Championship. The third Carter Cup was claimed by now PGA TOUR standout Morgan Hoffmann of Franklin Lakes, N.J., making him the second youngest winner in the championship's history. 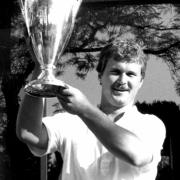 16 total MGA Championships have been played at Winged Foot, and nearly half of them were Met Opens. The first six have seen three amateurs claim victory, including now White Beeches head pro Jim McGovern in 1987. In 1967 it was amateur Jerry Courville Sr., whom the MGA Player of the Year is named after. Amateurs have been quite a theme since at Winged Foot since 1929 when Bobby Jones won his third U.S. Open. In 2002, the last time Winged Foot hosted a Met Open, Johnson Wagner earned the victory, but had just turned pro for the event. While he may not have been an amateur by title, it was still a young star on the rise winning at Winged Foot. Perhaps this year an amateur may emerge again, but this time on the club's East Course for the first time in Met Open history.

Keep checking back on mgagolf.org, as well as The Met Golfer, and Met Golfer EXTRA for coverage of our 100th Met Open at Winged Foot this August.