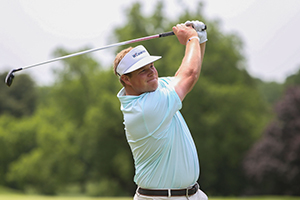 after qualifying at Century and Old Oaks Country Clubs at one of ten Sectional Qualifying Rounds in the country today. Two-time U.S. Open Champion Lee Janzen of Orlando, Fla., was the medalist after carding a 36-hole total of 4-under par with scores of 69 (Century) and 68 (Old Oaks). 2013 Met Amateur Champion Pat Wilson of Andover, N.J., qualified for his first U.S. Open thanks to a 1-under total after 36 holes.

Joining them will be Web.com Tour player Jamie Lovemark of Scottsdale, Ariz., who finished two behind Janzen at 2-under, and 2014 New England PGA Champion Rich Berberian Jr, of Derry, N.H., who tied with Wilson at 1-under.

Janzen, who qualified for his 20th U.S. Open, felt he handled adversity well at today’s Sectional Qualifying Round. “You aren’t going to play perfect for these long days, you have to just keep forging on,” the 50-year-old said. “I would say I persevered well today, that would be the number one thing.”

The eight-time PGA TOUR winner earned his first victory on the Champions Tour this past February at the ACE Group Classic in a playoff, and he was hoping that would lead to a great year. “I expected to play better since that win,” Janzen said. “But my form of late is not what I expect from myself. There’s no particular reason, no injuries or anything I can think of that has caused any of it.” 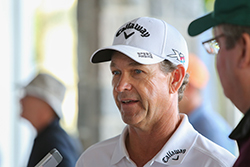 He found his game today, and hopes it carries over to Chambers Bay where he’ll take on the best players in the world in search of his third U.S. Open title. Janzen is playing in a Champions Tour Event this week and then it’s off to Washington for his first Open since 2008 at Torrey Pines. He claimed the title in 1998 at Olympic and 1993 at Baltusrol.

The other three players, on the other hand, are in a much different boat and will be competing in their first U.S. Opens, including New Jersey’s Pat Wilson. The 24-year-old played in sectional qualifying for the fourth consecutive year today, and after being close a couple of times, he finally punched his ticket to the championship. “It’s just very overwhelming at the moment. It was a grind today, but we’re here now, and I couldn’t be more excited,” he said. Wilson opened with a 1-over 71 at Old Oaks and bounced back at Century with a 2-under 69, which helped get him a spot in the field. “This is a big step and hopefully one of many,” Wilson said.

Jamie Lovemark, who missed out on qualifying in Purchase a year ago by one stroke is ready to head to Chambers Bay. The two-time Web.com Tour winner has achieved quite a bit in his career, but today was one of the bigger days he can remember. “This one stacks up pretty high, mostly because I was so close last year,” he said. “It’s a great way to get revenge.”

“I feel sharp, obviously not many people know much about Chambers Bay, so we’ll find out in a couple weeks what it is like. It’ll be different for sure, but you have to treat it like another tournament and just go out there and play,” Lovemark said.

New Hampshire’s Rich Berberian Jr. is playing some of the best golf of his life in recent years. The 27-year-old won the 2014 New England PGA Championship, was the runner-up at the PGA Match Play Championship, and is competing in late June in the PGA Professional National Championship. The head pro at Windham Country Club in New Hampshire fired rounds of 71 and 69 today for a 1-under total.

Three players found themselves in a playoff to determine the alternate positions: on the third playoff hole, Scott Harrington of Sottsdale, Ariz., claimed the first alternate position. It took an additional three holes but Fran Quinn of Holden, Mass., who played last year at Pinehurst, took the second alternate position after finally edging out amateur Vinay Ramesh of Newtown, Pa.

A few other top names just missed out on qualifying. At 1-over par, Matthew Dobyns of Lake Success, N.Y., who qualified for Pinehurst a year ago, and former Met Area standout and three-time PGA TOUR winner Johnson Wagner of Saint Simons Island, Ga., found themselves right on the bubble. While Wagner would have liked to qualify, he was happy to be back in the Met Area. “It’s always nice playing golf up here, I come back to play a lot but I don’t think I’ve played an MGA-run event since the 2002 Met Open,” Wagner said.

The two-time Met Open Champion has had a solid year on the PGA TOUR, including a runner-up finish at the Shell Houston Open in April. “It’s been up and down, a lot of missed cuts, a couple of good finishes, but I am looking for a little more consistency,” he said. “Making the putt on 18 at Shell Houston to force a playoff was probably the highlight of my golf career, so I took a lot of positives from that week.”

The 115th U.S. Open Championship will be played for the first time at Chambers Bay in University Place, Washington, on June 15-21. MGA alum Morgan Hoffmann also joins the field after earning an exemption due to qualifying for the TOUR Championship last year.

The MGA annually conducts a Sectional Qualifying Round for the U.S. Open. The MGA rotates host sites every three years, and in 2016 will return to Canoe Brook Country Club in Summit, N.J.