UPDATED: (June 1, 2015) - Six MGA alums competed in last week's PC Financial Open, the first of 12 events on Mackenzie Tour, formerly known as PGA TOUR Canada, and it was 2014 MGA Player of the Year David Pastore of Griff Harris who had the best finish of the week. Pastore was playing thanks to a sponsor's exemption, and was able to tie for 22nd at 6-under, despite an opening round 3-over 75 at Point Grey Golf & Country Club in Vancouver, Can. The 2014 Met Amateur and Ike Champion followed up his 75 with a 4-under 68 to make the cut, and a third round 1-under 71 put Pastore at 2-under through 54 holes. His final round began with a par on the opening hole, but a spectacular hole-in-one on the par three second hole quickly got Pastore to 4-under overall and he was able to tack on two more birdies for a bogey free round of 68.

The University of Virginia alum vaulted 19 spots up the leaderboard on the final day and earned $1,694 in his first Mackenzie Tour event. His last event came in early May on the Web.com Tour at the United Leasing Championship, where he was unable to make the cut. Pastore will play in the upcoming U.S. Open Sectional Qualifying Round on June 8 at Century and Old Oaks Country Clubs in Purchase, N.Y., where he will attempt to qualify for his first U.S. Open.

Joing Pastore in the U.S. Open SQR field is Mike Miller of Knollwood, who finished two shots back of Pastore in the PC Financial Open. The two-time MGA Player of the Year tied for 31st at 4-under, earning $1,050. Miller started the final round near the top of the pack at 7-under, but was unable to get anything going and carded a 3-over 75 on Sunday.

Unfortunately for the rest of the Met area players in action in Canada, they were unable to make the 1-under cut and did not play the weekend. Ryan McCormick of Suburban, who is in his second season on the PGA TOUR Canada, finished his first two days at even par just a shot away from the cut line.

Max Buckley of Westchester and Mike Ballo of Woodway were both 3-over and missed the cut in their Canada Tour debut, while Greg Etimos of Island Hills shot two rounds of 77 to miss as well. 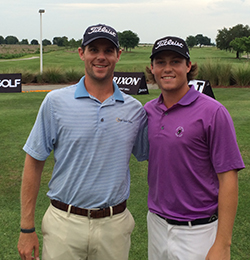 named Mackenzie Tour- PGA TOUR Canada. The contingent of MGA alums features past champions, and the 2014, '13, '12 and '11 MGA Players of the Year.

The PC Financial Open is played at Point Grey Golf and Country Club, which was host of the same event last year. The total field number is 156, with a total purse of $175,000.

Ryan McCormick of Suburban, who earned exemption into the PGA TOUR Canada last year, will be playing in his second season in Canada. The former Met Amateur winner and Met Open runner-up (both in 2012) had a top-10 finish last year at the PC Financial Open, his only top-10 of the season. McCormick earned his exemption status in the British Columbia Q-School tournament, finishing in a tie for sixteenth. He played in 11 events on Tour last year and earned a total of $6,592.

The 2014 MGA Player of the Year David Pastore turned professional at the end of last year and is making his PGA TOUR Canada debut at the PC Financial Open. Earlier this month, the Greenwich, Conn., native played in the Web.com’s United Leasing Championship, and he received a sponsor exemption to this week's event in Canada.

Two Met players who came out of the Florida Q-School tournament include Max Buckley of Westchester and Mike Miller of Knollwood. This will be both Buckley and Miller’s first start in Canada, after they both placed inside the top 16 to earn exemption into the seasons first six events.

Buckley, the 2013 MGA Player of the Year, made it to the second stage of the Web.com Q-School, but fell short. Aside from playing in Canada, Buckey will play in several events in PGA Tour Latinoamerica after earning a conditional status earlier this year.

One of the few players in the field who has had the privilege to play in a PGA Tour event is Miller, who qualified for the Valero Texas Open last year. The 23-year-old and two-time MGA Player (2012 & '11) of the Year tied for eleventh in Florida to earn his status.

Mike Ballo of Woodway will be making his debut in Canada in this week’s event with a conditional status for the 2015 season. Last year, Ballo played in two Web.com events. Greg Etimos of Island Hills is also in the field after qualifying for status at the British Columbia site.