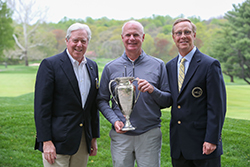 Amateur Championship by eight strokes at Westchester Country Club. Zahringer, one of the most well-known amateur players in the Met Area, has captured nearly every MGA title – the Met Open, Met Amateur and Ike Championships, but this is his first Senior Amateur win.

His first round 7-under 65 gave Zahringer a four-shot overnight lead, and was what he felt separated him from the field. “Having made 11 birdies (seven in his first round) and one eagle over 36 holes, that gave me a huge cushion,” the former Westchester Country Club Member said. “I only made one double-bogey, and to have a five or six shot lead after the first day, that’s a big deal.”

After being in full attack mode on day one,  the decorated champion played conservatively during the final round. His final score of 6-under (138) was a new MGA Senior Amateur record, in addition to his all-time record of MGA Championships. Zahringer also became just the fifth player in MGA history to win both the Met Amateur and Senior Amateur. He doesn’t plan on slowing down anytime soon.

“I still have some aspirational goals in golf, more at the national level” he said. “I’d like to play in a couple more U.S. Senior Opens; those are a lot of fun. I plan on playing in the 100th Met Open at Winged Foot, maybe surprise a few people.”

The 62-year-old has won countless events over many years, speaking to how consistent of a career he has had.

“I think, unscientifically speaking, that living and working in New York City – believe it or not – is part of the answer,” he said. “There is a forced absence every year, this year there was probably three or four months where I didn’t play at all. I’ve avoided injuries and mentally I feel that I am a late starter compared to my national competitors. I feel fresh and competitive golf is not stale.” 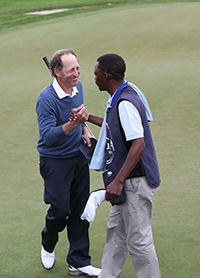 Eight shots back of Zahringer  was three-time MGA Senior Amateur champion Steve Rose of Fresh Meadow who finished as the runner-up. Rose carded rounds of 71 and 75 for a total of 2-over (146). One shot behind Rose and finishing in solo third was 2014 MGA Senior Amateur runner-up David Prowler of Bethpage State Park. Prowler opened with a 3-under 69 and followed with a 6-over 78 for a total of 3-over 147.

Other top finishers were Richard Feldman of Centennial and Don Enga of Cherry Valley, who each finished with scores of 4-over (148) and tied for fourth. In solo sixth at 5-over (149) was Jim Romaniello of Shorehaven, who fired rounds of 73 and 76. Tying for seventh at 6-over (150) was 2009 Champion Al Small of Fairmount, along with Peter Van Ingen of Deepdale and Richard Jaffee of Rolling Hills.

Westchester Country Club’s West Course played to a par 72 at 6,389 yards for the field of seniors age 55 and older. The condition of the course was phenomenal, as virtually every competitor commented. The best female professionals in the world will visit the club next month for the 2015 KPMG Women’s PGA Championship.

The MGA Senior Amateur Championship is annually the first event of the championship season. A full field of 168 players took on Westchester’s West Course, and 43 survived the first-round cut after shooting scores of 79 or better. Next year the championship heads to Long Island and will be played at Huntington Country Club.