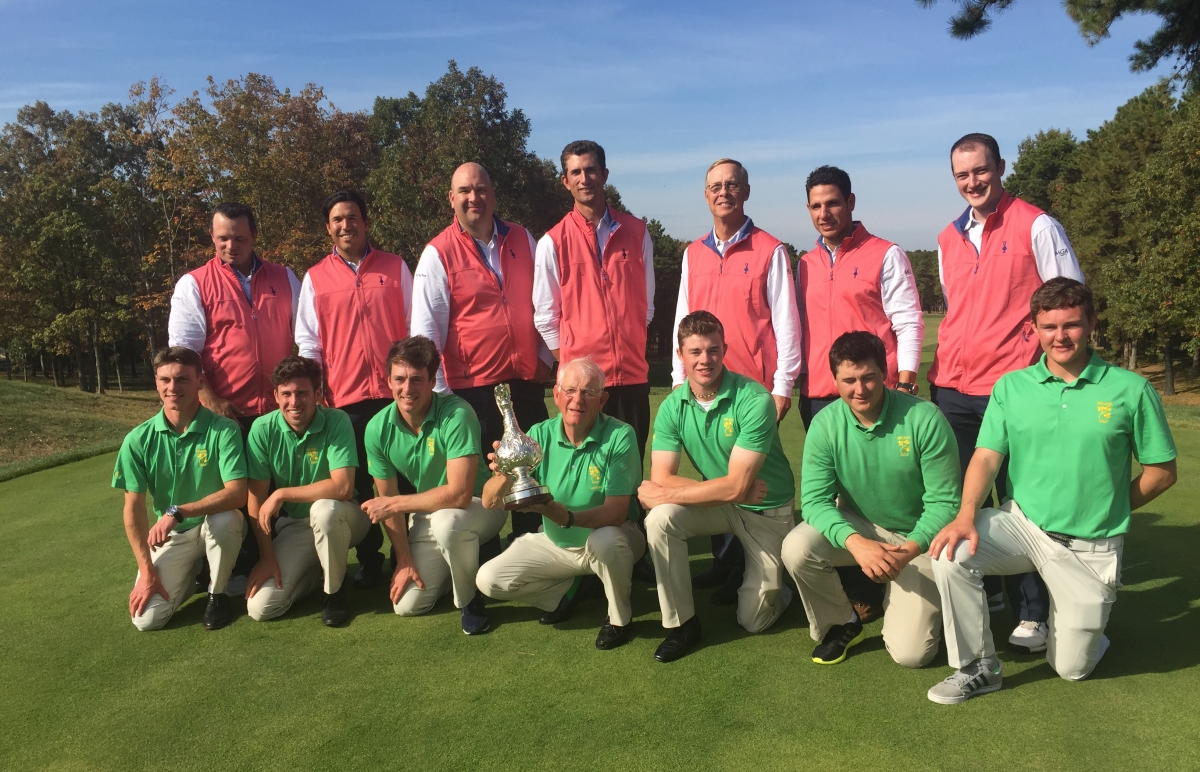 JACKSON, N.J. (October 21, 2015) – The MGA looked to make a rally in singles play of the 13th Governor Hugh L. Carey Challenge Cup Matches on Wednesday, but the Golfing Union of Ireland fended off the threat down the stretch to claim an 8-4 victory at Metedeconk National Golf Club.

The GUI took a 4-2 edge into the closing session of singles matches, after Colin Fairweather’s birdie on the 18th hole earned he and Rowan Lester the final point in four-ball, as their match was unable to be completed Tuesday due to darkness.

Matches played evenly early on, often with each side owning a lead in three matches. Trevor Randolph of Arcola won the second hole of his match, but Lester quickly caught fire and carded four birdies in the next seven holes and took a 4-up lead. Back-to-back wins on Nos. 12 and 13 closed the match, 6&5.

While the GUI took a 5-2 edge with the win in the No. 4 match, the MGA stood in good position in the remaining matches. The lead match was key, as Brian Komline of Black Oak faced a three-hole deficit early against Alex Gleeson, but rallied back as he started the inward nine. Komline claimed a 1-up lead through 15, giving the MGA the lead in four of the remaining five matches.

Meanwhile, Stewart Hagestad of Golf & Body NYC picked up the MGA’s first point in singles play, defeating Stuart Grehan, 3&2. Hagestad’s length off the tee proved key in his win, as he won three of the four par-5s, two of which came with birdies. Luke Feehan of Mahopac quickly gathered another point for the MGA, defeating Fairweather 4&3 to pull the hosts within one, 5-4.

At the time of Feehan’s win, two matches stood all-square while GUI led one match.

While Komline had rallied back to gain a lead, Gleeson turned momentum back to the side of those from the Emerald Isle, winning both Nos. 17 and 18 for a 1-up victory and a 6-4 overall lead.

Darin Goldstein of Noyac and Joe Saladino of Huntington stood all-square late in both of their matches, but the Irish closed strong down the stretch.

John Ross Galbraith faced a two-hole deficit early, but fought back against Goldstein beginning with a win on the eighth hole. After three-straight halves, Galbraith won four of the next six holes for a 3&1 win, securing the GUI’s clinching seventh point.

Saladino had squared his match with Colm Campbell with a birdie on the 17th, but Campbell responded on the last with a birdie of his own, setting the final score of 8-4.

The GUI now holds an 8-4-1 lead in the matches, halting the MGA’s two-match win streak including its first on foreign soil in 2013. In the last five matches, the record stands even at 2-2-1.

The playing at Metedeconk marked the Carey Cup’s return to the site of the inaugural match. Originally named the Metedeconk International Challenge Cup, the MGA and GUI first met in 1990. The matches were not played in 1994, but returned in 1996 when the late Governor Hugh L. Carey—a proud Irish-American—led efforts to revive the competition to foster sportsmanship between the countries.

Metedeconk once again served as an outstanding host for the international match. The course, meandering through forestland and utilizing the natural terrain, provided prime fall conditions and a strong setup for the high-level match play competition.