ELMSFORD, N.Y. (June 20, 2016) – An outstanding field of 146 competitors is set to take on Essex County Country Club in West Orange, N.J., June 27-28, for the MGA’s first major of the season, the 61st Ike Championship. The event, founded in 1953 and acquired by the MGA in 1986, stands as the area’s premier stroke-play amateur event and crowns a champion over 54 holes. Reigning champion Cameron Young of Sleepy Hollow (pictured right) headlines the field and looks to add to the rather frequent occurrence of successful title defenses found throughout the Ike’s history. On nine occasions, a competitor has claimed back-to-back victories in the championship, the last being Cameron Wilson in 2012-13. The now 19-year old became the youngest winner in the championship’s history last year with an impressive five-stroke win at Friar’s Head. Following his stellar 2015 which led to MGA Player of the Year honors, Young had a successful freshman campaign at Wake Forest as he claimed a pair of individual titles and helped his team advance to the NCAA Championship.

A number of additional competitors are looking to follow up their quality collegiate seasons with local success. Leading this group is Seton Hall graduate Ryan Snouffer, who finished second in last year’s player of the year race and will be playing a “home game” at Essex County. Snouffer can build upon his strong showings in last year’s MGA majors, after finishing tied for third in the Ike and being runner-up in the Met Am in 2015. Peter Kim of Royce Brook, the reigning Met Am champion, recorded two of his highest finishes of the season at the Patriot League Championships—where his Army squad took the team title—and NCAA Regionals, placing fourth and tied seventh, respectively. Meanwhile, Luke Graboyes, a member of eClub – New Jersey, closed out his junior season at Cornell by claiming medalist honors at the Ivy League Championship (played at Metedeconk National) and advancing to NCAA Regionals as an individual. Others to watch include 2014 Carter Cup winner Erick Alonso of Darlington, Evan Grenus of Sterling Farms, 2012 Carter Cup champion Jared Mactas of Paramount, and 2010 MGA/MetLife Boys winner Matt Lowe of Colonial Springs, all top-10 finishers in last year’s Ike. 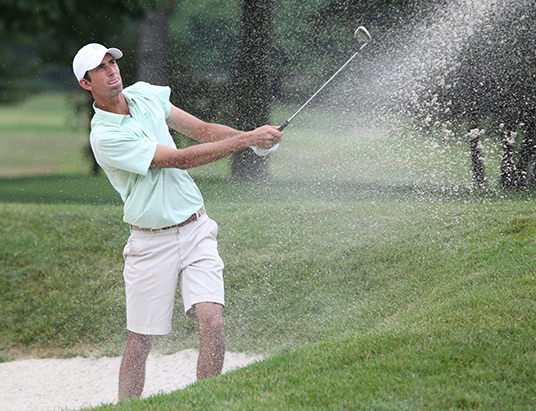 A host of players have already tasted victory this season and hope to carry that momentum into the Ike championship. Trevor Randolph of Arcola owns three wins this season, taking titles at the New Jersey State Mid-Am, the Travis Memorial and, most recently, the Hochster Memorial. Randolph broke through with his first MGA victory last October in the Mid-Am and is prepared to add another title. Darin Goldstein of Noyac is also off to a good start in 2016, having won the Long Island Amateur and finishing tied for eighth—and as low amateur—in the Long Island Open. Stewart Hagestad of Deepdale (pictured left), winner of this year’s Brae Burn Invitational, made his MGA debut at the Ike last summer with a runner-up finish. The former USC golfer went on to have an impressive summer in the Met Area, winning the Mittlemark Invitational, advancing to the semis of the Met Amateur, and competing on the MGA’s team in the Carey Cup. As always, 10-time MGA Player of the Year George Zahringer III of Deepdale continues to be a threat to putting his name atop the leaderboard. Zahringer, recently inducted into the National Senior Amateur Hall of Fame, won his 17th MGA title by claiming the MGA Senior Amateur in May. He also owns wins in the senior division for both the Richardson Invitational and the Anderson Memorial this season.

Other familiar MGA competitors to watch include two-time MGA Player of the Year Joe Saladino of Huntington, Sam Bernstein of Century who owns a trio of top-five finishes in the Ike, this year’s New Jersey State Mid-Am and Eagle Oaks Invitational runner-up Brian Komline of Black Oak, and Niall Handley of Essex Fells who claimed one of his two MGA Mid-Am titles at Essex County.

Essex County Country Club, a founding club of the MGA, last hosted an MGA championship with the 2011 Mid-Am and last hosted an MGA major in 1987—also being the Ike. The historic course features elevated greens guarded by deep, flat-bottomed bunkers and a sensational quartet of par-3s. Its back nine (No. 18 pictured right) is regarded as one of the most challenging in all of the Met Area and is sure to help decide a worthy champion.

The championship is played over 54 holes, with a cut to the low 40 players (and ties) following 18 holes of competition. Competitors then play 36 holes on the second and final day. Five sectional qualifying rounds were held throughout the Met Area to determine the final field.

The Ike Team Championship runs concurrently with the individual championship. At the conclusion of 54 holes, the two individuals from the same club with the lowest total combined score for 54 holes will be named team champions.

The MGA will provide 9 and 18-hole scoring for Monday’s first round and Tuesday morning’s second round, followed by live hole-by-hole scoring for the groups playing in the final round on Tuesday afternoon. Full coverage of the championship, including photos, video, interviews and more can be found on www.mgagolf.org and on the My MGA mobile app.