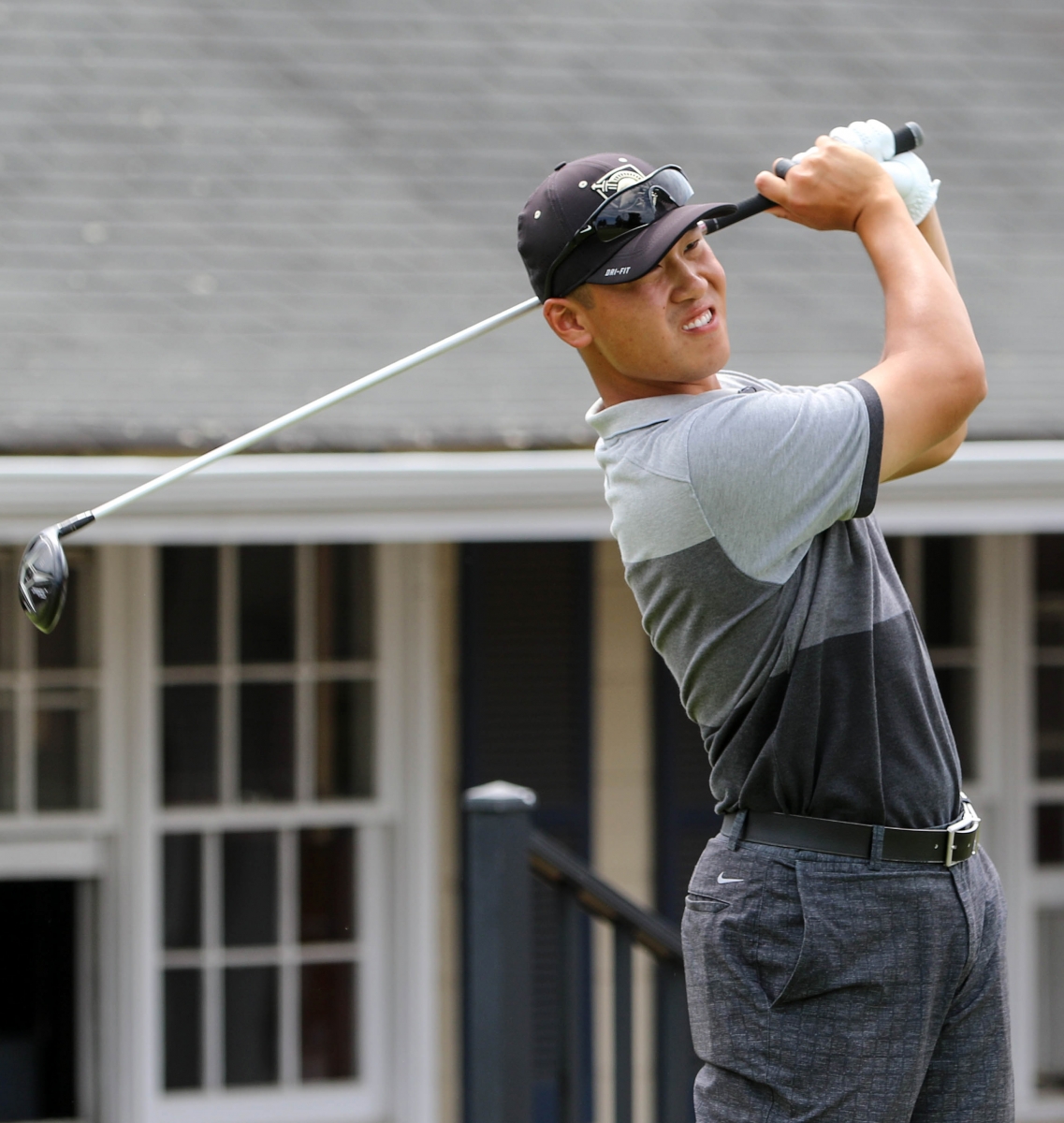 WEST ORANGE, N.J. (June 27, 2016) – A record-setting performance from reigning Met Amateur champion Peter Kim of Royce Brook highlighted Monday’s opening round of the 61st MGA Ike Championship at Essex County Country Club. Kim, a rising senior at Army West Point, fired an 8-under 63 to set both a course and championship record and will carry a two-stroke lead into Tuesday’s final 36 holes of play.

Related: Round 1 Results | Round 2 Pairings

Tyler Cline of The Tuxedo Club matched the previous championship record of 65 during his morning round, while Essex County’s own Ryan Snouffer tallied a 4-under 67 while playing alongside Cline, leaving the two well-positioned for Tuesday’s play.

“I hit a lot of great tee shots, lots of great iron shots onto the greens, and made a lot of putts,” said Kim of his stellar bogey-free round. “I really took advantage of the opportunities that I had, especially on the par-5s.”

The 21-year old began his day on the 10th hole, and made the turn to the front side in 2-under. He lit it up from there, carding four birdies and an eagle-three on the par-5 seventh hole en route to a blistering 30 over the final nine holes. Though Kim’s summer includes an intense schedule for his military training, the Metuchen, N.J., native has been home the last couple of weeks, allowing him to commit time to sharpening his game in preparation of the Ike.

“Staying in the moment was the biggest thing for me,” remarked Kim after finishing the round with a birdie on the par-3 ninth. “I can’t really describe it—you’re just playing and plugging along … there’s no second thoughts about anything.”

Though he’s used to a grind, Kim isn’t putting forth any expectations or plan for tomorrow’s scheduled 36 holes. “There is no game plan,” he explained, continuing, “you never know what’s going to happen. Tomorrow’s going to be a marathon—36 holes is a long day of golf, so you just have to take it one hole at a time.” 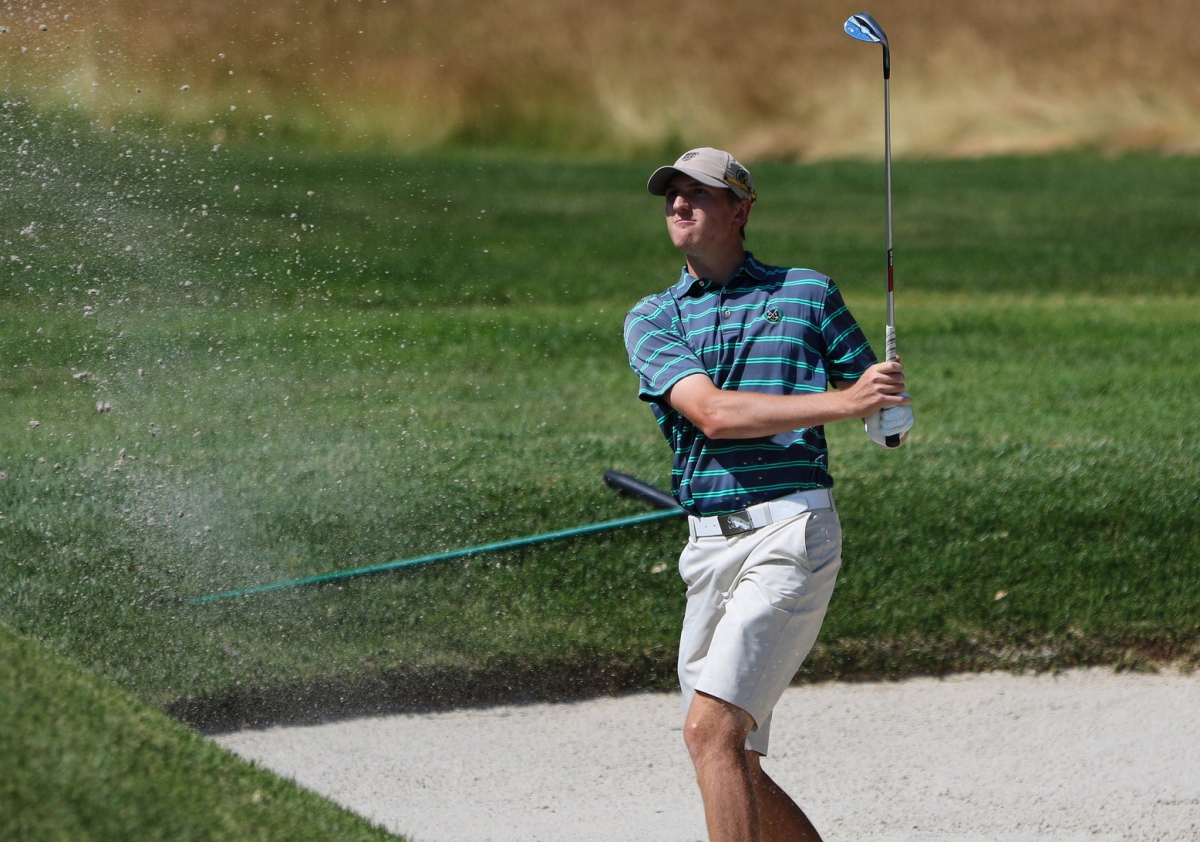 Just hours before, Cline (pictured left) staked his name atop the leaderboard after matching the low score in the Ike’s history—his 65 being the sixth such round in the event’s 60 years of play.

“It was just the putter,” remarked Cline. “I hit the ball pretty good, but to make a couple of 20-footers definitely helps.” Cline had it going early, registering four birdies on his opening seven holes. He appeared to be in trouble on the par-4 10th, after his approach found a deep greenside bunker. But after blasting onto the green, the former Clarkson University golfer drained a 20-footer for par.

He added two more birdies coming in—on Nos. 16 and 17—for the strong finish. “I drove the ball great and putted great,” said Cline, who has competed in the Boff Invitational and the Stoddard Cup at Essex County in the past. “I kept the ball in play and made a bunch of putts.”

Meanwhile, Snouffer—who was unsure of his status for the championship having recently been recovering from a hip injury—was pleased with his round despite limited rounds over the last several weeks. “I was making a lot of putts out there—a lot of the 10-15 footers that you need to make to make birdies,” he said. “Everything was pretty solid. I made a good eagle on 13—I chipped in. Besides that, it was pretty consistent, just a little downfall on the last two holes,” he said in reference to his double-bogey, bogey finish.

“I think the key here is missing in the right places,” remarked Snouffer, sharing his personal insight on the course. “There are a lot of tough holes out here and even if the pin is in the center of the green, if you miss in the wrong place you could still have a really tough shot. It would have been good to be three-shots higher than I am now, but I think I’m in a perfect position for tomorrow.”

Kieran Purcell, another member of Essex County, came in at 3-under 68 during the morning’s play. Purcell carded five birdies on the day, four coming in his first eight holes of play. Stewart Hagestad of Deepdale also registered a 68, doing so in the afternoon. Hagestad, the Ike runner-up in 2015, scored seven birdies on the day, posting consecutive birdies on two occasions.

Jonathan Jeter of Nassau Players rounded out the sub-par rounds for the day with a 1-under 71. Jeter played steadily, carding three birdies and just two bogies.

A total of 41 players made the cut at 73 or better. Play resumes on Tuesday with the scheduled second and third rounds. Groups will first tee off at 7:30 a.m. The MGA will provide 9 and 18 hole scoring for the second round, followed by hole-by-hole scoring for the majority of groups in final round during the afternoon.