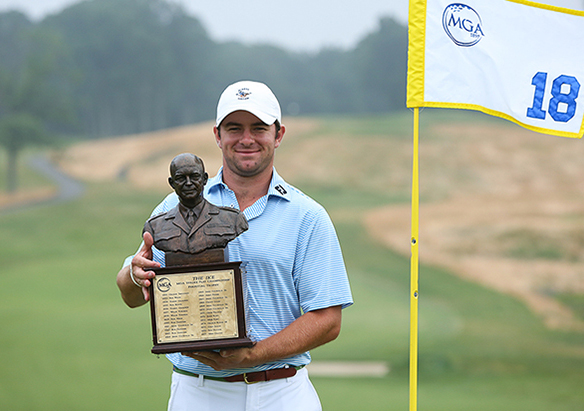 WEST ORANGE, N.J. (June 28, 2016) – A thrilling playoff put the exclamation point on an outstanding 61st Ike Championship, as Cameron Young of Sleepy Hollow successfully defended his title in a playoff over Peter Kim of Royce Brook at Essex County Country Club on Tuesday. The pair’s 10-under 203 tournament total matched the Ike’s 54-hole scoring record, but a par on the par-4 18th—the fourth playoff hole and the first hole of sudden-death—led to Young once again hoisting the prestigious Ike trophy.

“I just kept putting one foot in front of the other,” Young remarked after the come-from-behind win. “It’s such a cliché, but that’s really what I did all day.” Young’s “one foot in front of the other” included a stellar morning round of 7-under 64, placing him just two strokes behind Kim, the reigning Met Amateur champion. The Wake Forest rising sophomore then closed with a final round 68.

Overshadowed by the dramatics of the playoff was a clutch birdie on the 54th hole by Kim, which forced the initial three-hole aggregate playoff on Nos. 10-12. Both Young and Kim routinely scored a par-4 on the 10th, before a sand save from Kim on 11earned the Metuchen, N.J., native a one-shot lead. Young stuffed his approach on the 12th to just a foot, inducing another one-shot swing and sending the playoff into sudden death. On the 18th, Kim's approach found the right greenside bunker, while Young found the green, albeit nearly 40 feet away. After Kim blasted out to 10 feet, Young used a great lag putt  to secure par. Kim's ensuing par attempt missed wide.

“The way the golf course is set up, for me if I hit the driver well I’m going to have a lot of wedges in my hand,” explained Young, who was eight shots off the pace following Monday’s opening round. “So, I knew there was going to be a stretch somewhere along the line where I’d have a lot of birdies,” he continued. “I just tried to stay patient and wait for that to happen.” It certainly happened, as the now four-time MGA champion (2015 Ike, 2013 Met Junior & 2011 Carter Cup) tallied 13 birdies and an eagle to just four bogies during his 40 holes of play on Tuesday.

“Yesterday I struggled a little bit with the irons, but just kind of held myself in there,” Young said. “This morning I hit a few close and made a couple—all right in a row, which kind of moved me from nowhere close to right back near the lead. It was nice to see a few go in.”

Young made adjustments on Monday evening, making a visit to the range under the watch of his father David Young, who caddied for him over the two-day championship. “He doesn’t get to come to a lot of college tournaments or anything like that,” said Young in reference to he and his dad’s often clashing schedules. “It was nice to have him there, especially for the whole tournament, to see the first shot I hit to the very end.”

With the win, Young became the 10th person to successfully defend the Ike title—the last being Cameron Wilson in 2012-13. He also earns 250 MGA Player of the Year points.

The 21-year old Kim played steadily through the day, recording two rounds of 1-under 70. He carded three bogies and two birdies in each round. Kim, a rising senior at Army West Point, set a course and championship record on Monday behind a 8-under 63 effort.

Stewart Hagestad of Deepdale was in the mix late Tuesday as well. The former USC golfer carded his second straight 3-under 68 in the morning round and even grabbed a piece of the lead following back-to-back birdies on Nos. 14 and 15 in the afternoon. But, a pair of bogies coming in dropped Hagestad back to 8-under 205 for third-place honors.

Kieran Purcell of Essex County and Trevor Randolph of Arcola were one of three players to card 4-under 67 on Tuesday afternoon. The two jumped up the leaderboard into a tie for fourth at 5-under 208.

The top ten finishers are exempt into this year’s Met Amateur at Country Club of Fairfield and into the 2017 Ike.

The Ike Team Championship, which is awarded to the two individuals representing the same club who have the lowest 54-hole combined total score, was claimed by the host club, Essex County, behind the efforts of Purcell and Ryan Snouffer.

The Ike returns to Westchester in 2017, when Century Country Club hosts the first major of the season, June 26-27.