Zahringer Repeats at Senior Am

Zahringer Repeats at Senior Am 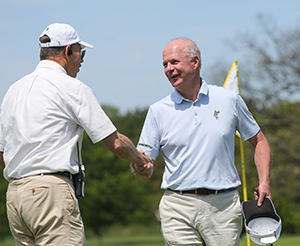 HUNTINGTON, N.Y. (May 11, 2016) – For the first time in nearly 50 years, the MGA Senior Amateur Championship has had a successful title defense, as George Zahringer  III of Deepdale claimed his second straight win in the event. The record 17-time MGA champion carded a 4-over 74 in Wednesday’s final round at Huntington Country Club, for a 1-over 141 tournament total and two-stroke victory.

Dennis Lynch of Nassau Players claimed solo second after rounds of 70-73, for a 3-over 143 total, as he made his debut in the championship. James Graham of Winged Foot and Edward Gibstein, an eClub Long Island member, tied for third at 4-over 144. Jay Sessa of Gardiner’s Bay rounded out the top-five at 5-over 145.

“I was very fortunate to have gotten out to a very good start yesterday,” said Zahringer in reference to Tuesday’s opening round 67. “It gave me some breathing room over the field.”

Zahringer took a three-shot lead into Wednesday’s final round, but admittedly did not hit the ball quite as well on Wednesday. “Today’s round was a little scratchy, and on this golf course, if you’re not hitting the ball properly—and not putting the ball in the correct spot on the greens—you can make bogies. My round today was a good example of that.”

Zahringer began steadily with eight straight pars, but then made five bogeys in a six-hole stretch to come back to the field. At that point, Lynch stood within just one stroke, but Zahringer reclaimed a shot with a timely birdie on the par-5 15th. Three straight pars to close the round sealed the victory.

Lynch, a two-time MGA Mid-Amateur champion, also carded five bogeys on his round, but added birdies on Nos. 12 and 15 for the final round 73 and runner-up honors.

Graham looked to challenge Zahringer early in the round, as birdies on Nos. 2 and 3 brought him to even par for the championship. Graham carded five bogeys through the remainder of his round to just fall off pace. Gibstein had a similar hot start with birdies on the first two holes, but a triple-bogey 7 on the par-4 13th derailed his run. He closed with a birdie on the last to match the day’s low score of even-par 70—also recorded by past champion Jay Blumenfeld of Mountain Ridge. 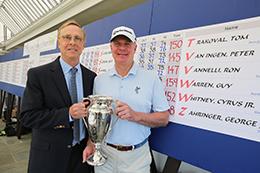 Two-time Senior Amateur winner Ron Vannelli of Forsgate and Blumenfeld tied for sixth at 6-over 146, while Don Enga of Cherry Valley and Al Small of Fairmount tied for eighth at 7-over 147. Jim Romaniello of Shorehaven, Guy Warren of North Hills, Jim Hamburger of McCann and Matt Corrigan of Nassau Players all posted 8-over 148 tournament totals to tie for 10th.

Huntington Country Club was praised for its stern, true test of golf over the championship’s two days. Its unique bunkering, superb greens, and outstanding conditioning led to a stellar kickoff to the MGA’s 2016 championship season.

“It’s a real position golf course,” remarked Zahringer on the classic Devereaux Emmett design. “You have to drive it in the right spot to have the best approach angle to these greens. Some of these greens are tiny—they’re fabulous green complexes, with tremendous variety.”