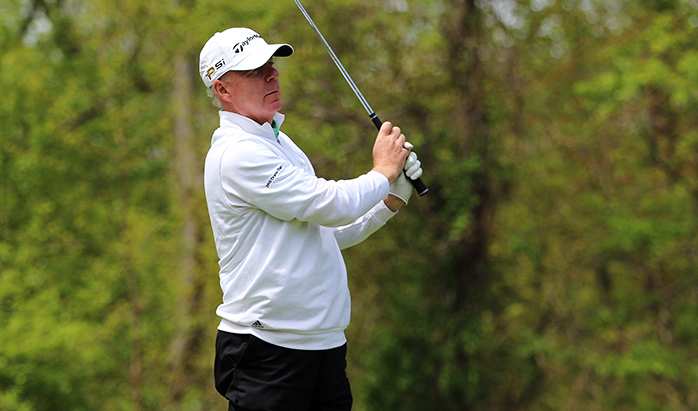 HUNTINGTON, N.Y. (May 10, 2016) – Reigning champion George Zahringer III of Deepdale has begun his title defense at the 89th MGA Senior Amateur Championship by firing a 3-under 67 to take a five-shot lead at Huntington Country Club following the morning wave of play. James Graham of Winged Foot and Jon Doppelt of Fresh Meadow both carded rounds of 2-over 72. The afternoon wave is currently on the course.

Beginning his round on the 10th hole, Zahringer opened with a bogey, but quickly bounced back with birdies on Nos. 11 and 12. Another bogey followed on the par-4 13th, but that would be his last of the day. He closed his opening nine with five-straight pars, before reeling off back-to-back birdies once again on Nos. 1 and 2. After adding a final birdie on the par-4 5th, Zahringer closed his round with four consecutive pars for the 67. Last year, Zahringer fired a first round 65 and cruised to an eight-shot win at Westchester Country Club's West Course--setting 18 and 36-hole scoring records for the championship in the process.

Graham converted three birdies on his round, including two straight on holes 6-7. Another birdie on the par-4 11th returned him to even, but bogeys on 16 and 17 led to his opening round 72. Similarly, Doppelt, beginning on the 10th hole, strung together seven straight pars from the 16th to the 4th, and returned to even par thanks to a birdie at the par-4 5th. But, bogeys on two of his closing four holes resulted in his 2-over round.

Four players came in at 3-over 73, including Jay Sessa of Gardiner’s Bay, Anthony Fioretti of Ballyowen, Jim Romaniello of Shorehaven, and 2014 Senior Open champion Adam Kugler of Alpine. Kugler began on the back nine and made the turn in 2-over par, but steadied over his final nine by carding just one bogey the rest of the way.

Edward Gibstein, an eClub Long Island member, carded the lone 4-over 74 in the morning, while eight players, including 2009 Senior Am champion Al Small of Fairmount and 1997 U.S. Mid-Am champion Ken Bakst of Friar’s Head, posted 5-over 75 to open play.

The 36-hole stroke play championship is open to golfers aged 55 and over, and the field is cut to the low 40 scores and ties (and anyone within five shots of the lead) after the first 18 holes.

Scoring updates will be provided by the MGA throughout both days of the championship, offering 9 and 18-hole updates during the first round and hole-by-hole scores for the majority of groups during Wednesday’s final round. Live updates will also be available on the MGA’s official Twitter, @MGA1897.