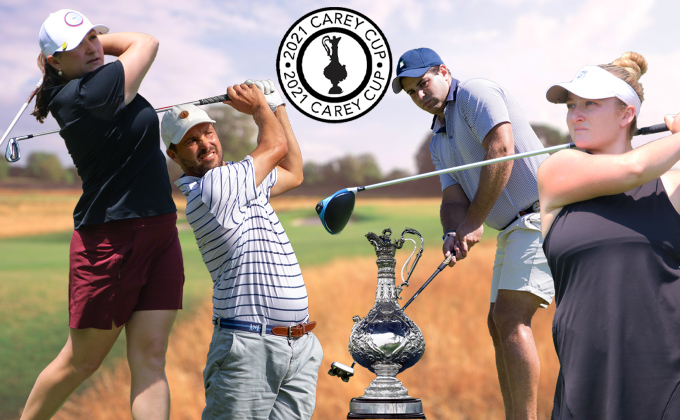 ELMSFORD, N.Y. (September 2, 2021) – Four additional players have been extended invitations to compete on the 2021 MGA team for the 16th Governor Hugh L. Carey Challenge Cup: Garett Engel of Old Westbury, Sam Goldenring of Brooklake, Alexis Hios of Westchester, and Noelle Maertz of Ridgewood. All four players will be making their first appearance on an MGA international team, with the matches slated for October 12-13 at Carton House in County Kildare, outside of Dublin.

Hios, 25, and Maertz, 27 have experience teaming up together for match play events: the duo qualified for the 2021 U.S. Women’s Amateur, played in April. Hios captured two WMGA titles this season at the Match Play Championship and the Stroke Play Championship. At July’s Match Play Championship, Hios faced Maertz in the final match after each of them had advanced through the first three rounds of match play. Maertz recorded a top-ten finish in this season’s Women’s Met Open and recently qualified for the U.S. Women’s Mid-Amateur, her sixth USGA championship.

Engel, 37, captured the Met Amateur Championship in early August at Plainfield, and will bring his own match play experience to the team. He finished as a semifinalist at the Long Island Amateur in July, a title which he won in 2017. Both Engel and Goldenring, 23, recently competed in the Met Open Championship at Hudson National. Goldenring has a number of top finishes this season, including a T-3 finish at the Ike and the Hochster Memorial. He recently represented the Met Area in the U.S. Amateur Championshihp at Oakmont.

The Carey Cup – which originated as the Metedeconk International Challenge Cup – was first played in 1990. The teams played once again in Ireland in 1992 but did not meet in 1994. In 1996, the matches were conducted again thanks to an effort spearheaded by the late Governor Hugh L. Carey, who envisioned the matches as an opportunity to foster sportsmanship and goodwill between the countries. Ever since, the matches have been played in his honor with a spirit of camaraderie and competition

Golf Ireland was established in 2019 following an overwhelming endorsement by Ireland’s golf clubs. It became operational in January 2021, succeeding the Golfing Union of Ireland (GUI) and the Irish Ladies Golf Union (ILGU) to become the single governing body for golf in Ireland. The 2021 matches will see the expansion of teams from six members to 10 with the addition of four women’s competitors to both sides. Teams will now compete for 20 points, instead of just 12.

The event is scheduled to kickofff on Monday, October 11 with an "Am-Am," in which each of the MGA and Golf Ireland players will be paired with three amateurs in a best ball competition.

The matches will take place on Carton House’s Montgomerie Course, which has hosted three Irish Opens (2013, 2006 and 2005) and the 2018 World Amateur Team Championships. Designed by Colin Montgomerie, the course was awarded “Best New Design of the Year” by Golf World when it opened in 2004. The Carey Cup was played at Carton House in 2005; the Irish defeated the MGA to win the cup.