DEAL, N.J. (August 4, 2012)– It was nearly impossible to knock off Matt Mattare of Bethpage or Ryan McCormick of Suburban during their semifinal matches in the 110th Met Amateur Championship at Hollywood Golf Club. Just ask defending champion Mike Miller of Knollwood, who failed 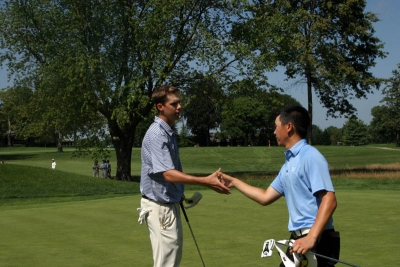 to record a single bogey and played 18 holes in 2 under par, yet lost 1-up to his friend and rival McCormick. Or 18-year-old  Harrison Shih of Alpine, who played 14 holes in 2 over par.

It was a near-flawless display of golf from both Mattare and McCormick that propelled them into the 36-hole final on Sunday. In breezy, steamy conditions in Deal, N.J., the two winners combined for eight birdies and only one bogey in 32 holes of golf. Mattare, 26, closed out his match with a par on the par-4 14th hole to win 5 & 4. McCormick, 20, two-putted for par on the 18th hole to beat the reigning MGA Player of the Year.

“We were both playing great, it was a lot of fun out there,” McCormick said. “I knew going into today it wasn’t going to be 5 & 4 or 4 & 3. I feel pretty good. Mike and I are really good friends. But both of us want to beat each other really badly.”

After Miller birdied the second hole to take an early 1-up lead, McCormick drilled a severe right-to-left breaking, downhill 30-foot putt on the par-4 third hole for birdie to square the match, then stuck his approach shot to three feet on the par-4 fifth hole to go 1-up. He never relinquished the lead.

“We both played really well,” Miller said. “Right now I’m disappointed with the way I played, even though I went 2-under. No regrets, the golf course was playing grea 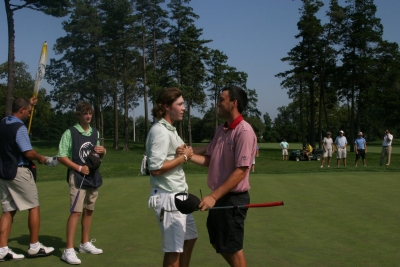 t today. He [McCormick] is going to win; that’s my prediction if I’m allowed to make one.”

Mattare found himself 1-down early on after a birdie from Shih on the second hole, but then proceeded to go birdie-birdie-birdie on the next three holes, including a near ace on the difficult par-3 fourth hole. Shih, who’s on his way to Columbia University in the fall, would only win one more hole, the 11th, in which he nearly dropped his approach shot in from the fairway.

“First of all, my speed on the greens was great,” Mattare said. “If I was missing it, I left a tap-in. It’s all about being in control. I always hated match play growing up, but the last couple years I’ve grown to really like it. I’m looking forward to slugging it out for 36 tomorrow."

All quarterfinalists in this year’s Met Amateur have earned exemptions into next year’s Met Amateur and Ike Championship, and the winner of Sunday’s 36-hole final gains an exemption into the 97th Met Open Championship, to be held August 21-23 at Plainfield Country Club in Edison, N.J. The championship match will begin on Sunday at 7:30 a.m. For complete coverage, including live hole-by-hole scoring, photos and video, visit mgagolf.org.