Besaw Cuts Through the Field to Win 20th Carter Cup

Besaw Cuts Through the Field to Win 20th Carter Cup 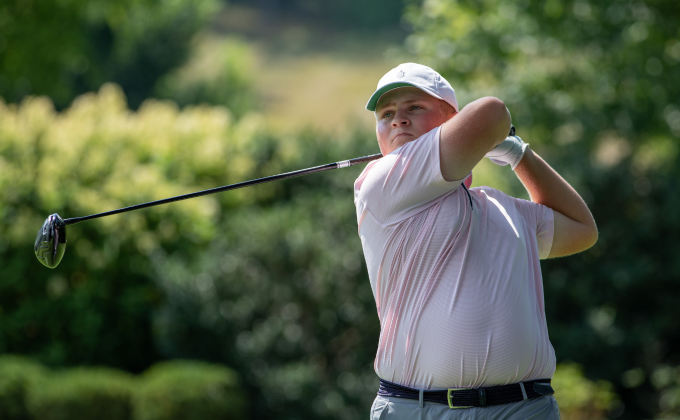 SPRINGFIELD, N.J. (August 2, 2022) -- Cameron Besaw of New Canaan, Conn., left no doubt en route to his victory in the 20th Carter Cup at Baltusrol Golf Club. Besaw’s 8-under 64 final round on the famed Lower Course and two-round score of 8-under 136 broke respective records in Carter Cup history as Besaw cruised to a 10-shot victory to set yet another Carter Cup record.

Besaw entered the final round one stroke off the lead after an even-par 71 on the Upper Course during the morning round. He immediately tied the lead after a birdie on the first and from their it was all his show. Besaw went 4-under on the front, also carding birdies on the fourth, seventh and eighth holes.

“I think I knew I had something going on hole seven, when I made birdie,” said Besaw. “I had seven iron in and had a solid two putt. Then I hit a wedge to about a foot on eight to make another birdie and after that I knew I had to be close to the lead.”

His lone blemish on the round came on thepar-4 10th hole. His drive found the hazard on the right and despite hitting his second shot just left of the green, he couldn’t get up and down. However, much like the rest of his round, a one putt on the next green righted the ship.

“That was big because it felt like I hadn’t even made that bogey,” said Besaw. “To be able to get that stroke right back on 11 was a good feeling.”

Besaw continued to roll the ball well, making birdie on the par-4 13th. He then made a strong par save on 14, before rolling in a 15-footer to save par on the 15th.

“I hit my tee shot into the fairway bunker and I didn’t really have a shot at the green,” said Besaw. “I had been making a lot of putts so I knew if I could get it out and on the green I could two putt for bogey. To see that putt [for par] drop was nice.”

After that the stage was set for an iconic finish. A shot to seven feet on the 16th gave Besaw his sixth birdie of the round. Needing two pars on the closing pair of par-fives to tie the lowest round in Carter Cup history, Besaw seized his opportunity to cement himself in the record books.

“I checked the score on the 16th tee and saw I had a pretty big lead,” he mentioned. “After that birdie on 16 I knew I just had to play smart. Walking up 18 knowing that I had basically already won was a great feeling.”

Besaw said he didn’t hit the ball much better on the Lower Course than the Upper, but his putter was on fire. In fact, it was the newest club in the bag for Besaw.

“I actually hadn’t been putting well at all and that putter is two days old,” said Besaw. “It’s brand new and it worked well. I had a dream last night that I won and to have it actually come true is unbelievable.”

Elliot Parker of Cranford, N.J., and Barnes Blake of Westfield, N.J., tied for second at 2-over. Parker was one of two players to shoot even-par in the final round (Mark Vitels of Garden City, N.Y. was the other). No other golfer in the field shot better than even. In addition to finishing second, Blake also recorded and ace on his third hole of the morning round, holing a five iron from 195 yards on the Upper Course.

With his record-setting performance, Besaw etches his name among some of the Met Area greats. In fact, his round of 64 on the Lower Course is only one stroke behind the championship record at Baltusrol.