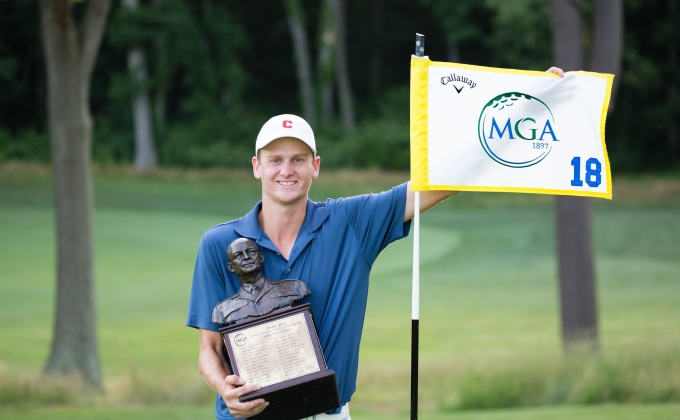 JERICHO, N.Y. (June 26, 2018) – Michael Graboyes of Watchung Valley closed with back-to-back birdies Tuesday afternoon, putting the finishing touches on rounds of 69-70 and propelling himself to a two-stroke win in the 63rd Ike MGA Stroke Play Championship Presented by Callaway at Meadow Brook Club.

After a 2-under 69 in Tuesday’s morning round, Graboyes was one of five players trailing 36-hole leader Chris Gotterup of Rumson by four shots. But, the experienced Graboyes turned in the afternoon’s lone sub-par score to move himself to the top with a 1-under-par, 212 tournament total. A 6-over 76 in the final round—along with a pair of 69s—placed Gotterup second, while Ryan Davis of New Jersey National and Ethan Ng of Knickerbocker posted 2-over 73s Tuesday afternoon to finish tied for third at 2-over-par, 215.

After easily making the cut behind his opening 73, Graboyes had a number in mind for Tuesday’s 36 holes of play: “My goal going into the day in general, including the morning round, was to shoot 140 for the two rounds,” said the recent Cornell graduate and four-time All-Ivy League honoree. “I didn’t know if that would be enough to win, but that was just a personal goal of mine.”

After turning in 2-over 37, Graboyes trailed Gotterup by five shots, but remained poised and turned things around quickly on the par-five 10th. “I made a couple bad bogeys on eight and nine and figured, ten is a par-five, I’ll try to take advantage—and I made a 15-footer for birdie.”

Putting proved to be the difference for Graboyes, who, despite a couple miscues with the putter on day one, felt comfortable on Meadow Brook’s quick greens. “Today I was able to make a few putts. I sort of told myself to buckle down, take advantage of some opportunities and that’s what happened.”

Coming down the stretch, Graboyes leaned on lessons learned during his four years of collegiate experience—which included an individual Ivy League title in 2017. “I was just trying to hit the best shot possible on every shot,” said Graboyes. “There have been a few times where, coming down the stretch, I would get a little unfocused and think about the scoring. You don’t have control over anyone else; you just have to play the best you individually can.”

The birdie on 10 settled Graboyes for his inward nine. After six consecutive pars, he converted a short birdie putt on the par-four 17th. With the birdie he tied Gotterup at even-par as the rising sophomore at Rutgers tallied double-bogey sixes on Nos. 11 and 14.

Graboyes then knocked it on the par-five 18th in two and took two putts from 50 feet for his second straight birdie. “I didn’t even know where I stood until my brother—after I made a three-footer for birdie on 18—he was like ‘You’re actually one up right now.’”

A bogey for Gotterup on the par-four 17th resulted in Graboyes’ two-shot win in the end and a special “back-to-back” of sorts in the Ike. Last year, Graboyes and his brother, Luke, claimed the Ike Team Championship at Century. This year, the two teamed up slightly differently, with Luke having turned professional last year. “It was exciting to come in and win the individual title, especially with my brother on the bag—it was special.”

Davis eagled the par-five 18th to finish in a tie for third with Ng, who settled for birdie on 18 after having an eagle look of his own. Ng and fellow Knickerbocker member Erick Alonso (T25) combined to claim the Ike Team Championship, which is contested concurrently and goes to the pair of members from the same club with the lowest combined score. Meanwhile, Adam Xiao of Old Westbury fired off the second-best Tuesday total with rounds of 69-72, tying for fifth with Sam Goldenring of Brooklake at 4-over 217 for the championship.

Joe Saladino of Huntington and Dylan Stein of Stanton Ridge tied for seventh at 6-over 219, with Stein’s day being highlighted by a hole-in-one on the 210-yard ninth to close his morning round. Evan Grenus of Sterling Farms and Zach Grossman of South Fork rounded out the top 10 with 7-over 220s.

With Graboyes standing as the lone player in red figures, Meadow Brook proved to be a challenging test to the Met Area’s top amateurs. Players raved about both the course’s layout and conditioning. The club finalized a Brian Silva renovation in early 2017, with updates including new tees, rebuilt bunkers and softened doglegs. The club is one of 16 Met Area clubs to have hosted all three of the MGA’s majors—the Ike, Amateur, and Open—last hosting the Open in 2007.

Canoe Brook Country Club in Summit, N.J., will host the 64th Ike next season, with play taking place on the North Course.