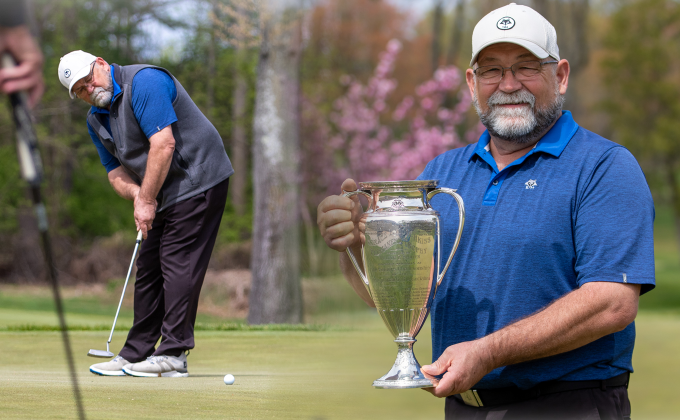 HAWORTH, N.J. (May 3, 2022) – After vying for MGA Senior Amateur Championship titles in the past, Dennis Lynch of Baiting Hollow wasn’t about to let another opportunity to claim victory slip by, as the 61-year-old made birdie on the first playoff hole at Haworth Country Club, Tuesday, to hoist the Horace L. Hotchkiss Trophy.

Lynch and Matthew Meyer of Winged Foot stood tied at even par at the end of the 36-hole championship, with Lynch shooting 1-over 73 on Tuesday to first round co-leader Meyer’s 3-over 75. The duo went to the par-4 10th to begin the sudden-death playoff and that’s all Lynch needed.

After both found the fairway, the advantage quickly went to Lynch as he fired an 8-iron to inside five feet.

“I wasn’t too happy about going to 10,” said Lynch. “I did not hit a good drive earlier in the day. I knew if I hit it hard down the left side, I’d have a shorter iron in and that worked out well.”

Meyer nearly dropped his 60-plus foot putt to get in first, but it just slid by and left the stage for Lynch. After picking the left edge as his line, he calmly drained the putt to secure what’s been a somewhat elusive victory after runner-up finishes in 2016 and 2021 and another top-10 finish in 2018.

Playing alongside past champion Ned Zachar of GlenArbor who was also in the mix, Lynch didn’t check his position until hitting it in the water on the par-5 13th, which led to his third bogey in the first four holes of the final nine. After some encouragement from Zachar that they both were still in it, Lynch settled in, making a pair of pars before a birdie on the par-5 16th.

“That was huge, especially after a couple silly bogeys when I made the turn,” said Lynch of the birdie, which was set up by a 5-iron into the par-5 green. He continued the solid closing stretch with two more pars, getting him into the playoff and to eventually claim the title.

With the win, Lynch becomes the first-ever player to win both the MGA Mid-Amateur (2009, 2010) and MGA Senior Amateur. He also gets an exemption into the 2022 Ike MGA Stroke Play Championship at Baltusrol, June 27-28.

Billy Byrnes of Nassau Players, 2019 champion Jim Graham of Winged Foot and Alan Specht of Port Jefferson at Harbor Hill tied for third at 3-over 147 for the championship, while Zachar, MGA eClub Connecticut member Richard Stevens, Edward Walsh of Trump National Bedminster and Ken Cohen tied sixth at 4-over 148. Bob Johnston of White Beeches and Jim Craffey of Arcola tied 10th at 5-over 149.

Many players this week were introduced to Haworth Country Club, which has been a longtime favorite qualifying venue through the years and was hosting its first-ever MGA championship. Despite rainy, cold, overcast conditions on Monday, the course was still in top shape and only got better as the weather improved on Tuesday. While scoring opportunities are available with five par fives in the layout, challenging greens and a number of small ponds add to the challenge of the course.

Next year’s 96th MGA Senior Amateur Championship will take place on Long Island, with the venue to be announced.