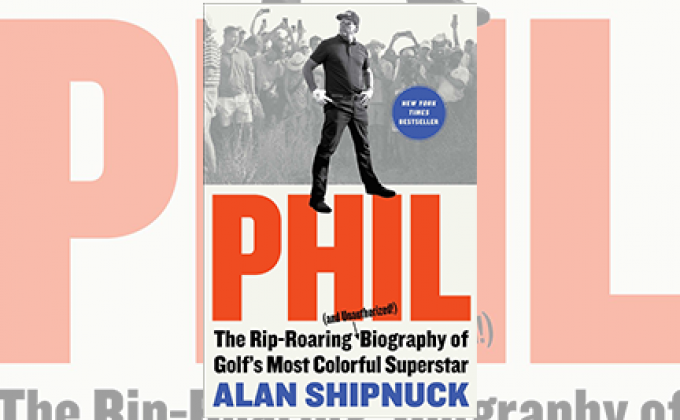 The golf book you’ve been hearing about since February is finally out, and even if you haven’t read it, you’ve surely read the most startling details from PHIL: The Rip-Roaring (and Unauthorized!) Biography of Golf’s Most Colorful Superstar by Alan Shipnuck (Avid Reader Press, $30.00).  The gambling debts, the embrace of the Saudi-funded LIV circuit as leverage against the PGA Tour, the sponsorships lost and spotlight ducked since his controversial comments came to light – can any book hold up to the glare of such advance publicity?

I am a biased observer, having worked with Shipnuck on his first two books, but I believe PHIL is the perfect match of author and subject.  Shipnuck’s eye for the telling detail, his scrupulous sourcing and dogged reporting lend authenticity to every revelation.  He opens the book with a long string of Phil stories, told by named PGA Tour pros and others who’ve been drawn into Mickelson’s orbit; the stories are funny, pointed, often profane, and paint a picture of a fanatically competitive athlete who loves to play and hates to lose, who always thinks he’s the smartest person in the room, and who enjoys nothing more than busting balls and having his busted in return.

Phil’s preternatural confidence made him the golfer he is, willing to take wild chances in search of big payoffs.  In the 1991 Walker Cup, team victory came down to Mickelson’s match; he short-sided himself on his approach to the final green, and then rather than making a safer play from a downhill lie in a closely-mown collection area, he pulled out his 60-degree wedge and nipped the ball perfectly, sending it into the air before landing and settling two feet from the hole.  But his faith in his abilities could be his greatest liability: witness the debacle on the 72nd hole at Winged Foot in the 2006 U.S. Open, when he double-bogeyed his way out of victory or even a playoff chance.  He didn’t win the Masters until he learned to play his greenside shots near the ground rather than with his beloved lob wedge.  For a long time he didn’t win majors at all, a fact that is easy to forget now that he owns six of them, the same total as Nick Faldo and Lee Trevino.

Shipnuck takes us through the many highs and relatively few lows of Mickelson’s career, and notes his penchant for tiptoeing along the edge of trouble both on and off the course.  He presents many stories of young pros who believe they learned how to win from Phil, both through his advice and from his example (and from the toughening they developed in practice-round money games).  His long rivalry with Tiger Woods is presented in great detail; the more salient point of departure may be Charles Barkley’s observation, after having been friends with both, that Phil is simply more fun to be around.  Phil’s storybook marriage to Amy is another topic for Shipnuck, the discussion leading to the conclusion that it really is as good as it looks.

Phil’s fans will find much to enjoy and admire in the book.  Phil’s detractors will find plenty of ammunition for their views.  All will be entertained by the breezy yet thorough way Shipnuck recounts one of the liveliest sports careers we’ll ever see.