Brackets Set at The Farrell

Brackets Set at The Farrell 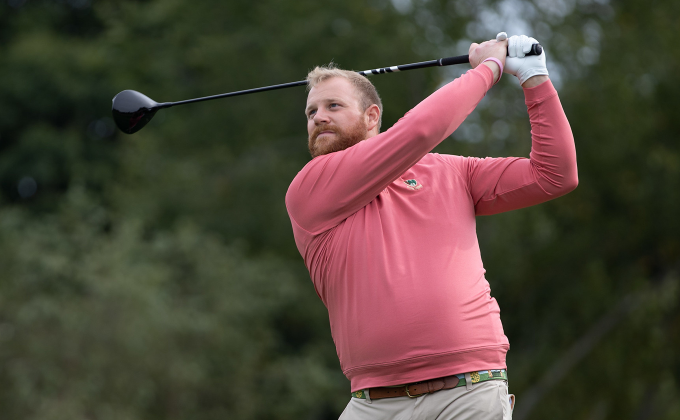 GREENWICH, Conn. (September 30, 2022) – Following 18 holes of on-site stroke-play qualifying, the three brackets are set in The Farrell as it began its inaugural playing, Friday, at The Stanwich Club.

“The course is awesome and it is not easy,” said Wilson, who won the 2013 Met Amateur at Stanwich. “You just have to keep everything in front of you. I was trying to hit fairways, greens and two putt most of the time.”

Wilson tallied a trio of birdies on both sides, with his final three coming in a row on Nos. 14-16.

“I hit a few close where I made them, and then I made two three putts because I put myself on the wrong side of the hole. Other than that, I was pretty good tee to green. I didn't hit every fairway but was in the right spot most of the day, and I rarely short sided myself which is key out here.”

Dardis had a consistent day, making a pair of birdies to offset a pair of bogeys.

“I played a pretty conservative game of golf,” said Dardis. "I kept it around the fairway and on the greens a lot of the time. Two birdies, two bogeys and a lot of pars, so a fairly uneventful day.”

McEvoy carded nines of 38-36 en route to her 74, beginning with a birdie on the par-4 opener. While the Greenwich, Conn., native and Michigan State graduate added a bogey and double bogey on the front, she strung together eight consecutive pars through the middle of her round before adding a bogey and a closing birdie on the challenging finisher.

The Georgetown graduate Bogache, meanwhile, had a tale of two nines, going out in 5-over 41 before carding a trio of birdies for a 3-under 33 on the way in for her 74.

“A lot of times when I make the turn, I’ll have a serious internal pep talk and I didn't really have one of those today,” said Bogache, who narrowly missed match play earlier this month in the U.S. Women’s Mid-Amateur. “It felt pretty effortless on the back, I was really good about picking targets and hitting to them.”

On a special day at Stanwich where many were remembering the late Billy Farrell, Bogache shared thoughts that echoed the sentiments of many in the field.

“Right when we got here, I felt so welcomed and you could tell how special this event is and what a special person Mr. Farrell and his family were,” she said. “I didn't grow up in the area, but I grew up in a place with a lot of golf, South Carolina, so I can appreciate the history. I am just so grateful to have been invited and to be able to play.”

The top 16 players from each bracket advanced to match play. While the women’s bracket needed no playoff, the Seniors had a 4-for-3 playoff and the Men’s division completed a 5-for-4 playoff.

Reigning MGA Mid-Amateur champion Chris DeJohn of Arcola and multi-time Florida State Golf Association champion TJ Shuart of Fort Lauderdale Country Club came in at 3-under 69, while past Ike champion Matt Lowe of Bethpage carded a 1-under 70 to round out those finishing sub-par on Friday.

Trevor Randolph of Arcola, who finished runner-up to Wilson in 2013, had an incredible eagle-eagle finish to card a 2-over 74 and make his way into the bracket.

The tournament now shifts to match play, with matches slated to begin at 7:30 a.m., Saturday morning. Women’s matches tee off on No. 1 beginning at 7:30 a.m., with the Men’s division following beginning at 8:42 a.m. The Senior division will tee off No. 10 at 8 a.m.