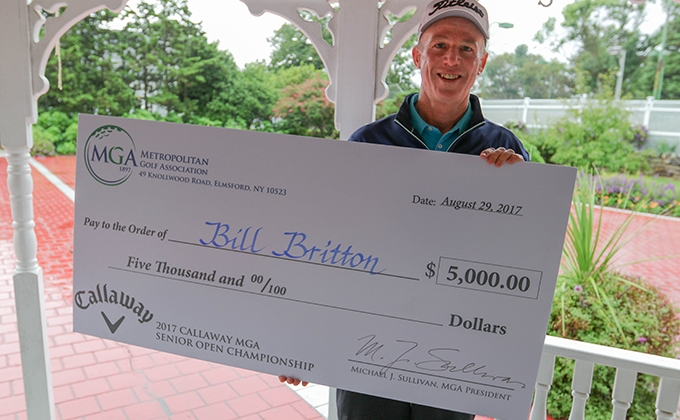 MONROE TOWNSHIP, N.J. (August 29, 2017) – Bill Britton of Trump National – Colts Neck tallied a 1-under 70 on Tuesday at Forsgate Country Club, battling wind and rain to come from behind and win the 21st Callaway MGA Senior Open Championship. Britton’s 70 was one of just two sub-par scores in the trying conditions, which led him to a 1-over 143 and his second career win in the event.

Two-time Senior Open champion Bobby Heins of Old Oaks and Mark McCormick of Suburban finished tied for second just one shot back at 2-over 144. Heins carded the day’s other red-figure score with a 3-under 68. Brent Studer of Metedeconk finished solo fourth at 3-over 146, while John Deforest Sr. of Rondout and Frank Esposito Jr. of Forsgate tied fifth at 4-over 146.

“I didn’t hit the ball very well yesterday but I got around with a decent score and today I just played much better right from the beginning,” said Britton, who also won the title in 2006 and now at 61 became the oldest winner of the championship. “I hit the ball solid and putted very well, so I was very happy with the way I played today.”

Britton—now a winner of five MGA titles—played consistently out of the gates, tallying a birdie on the par-four 4th along with eight pars to turn in 1-under. While he added a pair of bogeys on his inward nine, he also birdied the par-five 13th and chipped in for birdie on the par-four 16th. Several crucial par putts from the five-to-eight foot range down the stretch also proved key to Britton’s success in claiming the title.

“My thoughts really were just to play as well as I could,” said Britton as he began the day seven shots back. “Believe it or not, I never thought of [winning] throughout the round. I just thought I was so far back. It got tougher as the day went on. I think the leaders finishing behind us had the toughest conditions of the field today.”

Heins’ 3-under 68 was highlighted by an ace on the par-three 7th—the 20th of his career. Heins also had five birdies on the day while scattering in three bogeys. McCormick continued his strong play coming off a tie for 10th in the 102nd Met Open at Hollywood.

Competitors enjoyed the challenge of the spectacular Banks Course at Forsgate Country Club, which features a variety of uniquely undulating green complexes and challenging greenside bunkers. The course played just over 6,600 yards for both days of the championship.