Catching up with Aliea Clark

Catching up with Aliea Clark 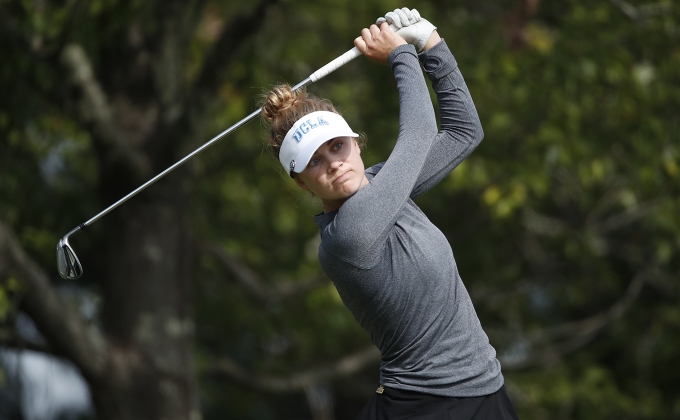 After moving to New York City, California native Aliea Clark quickly noticed the challege in trying to keep her golf game in shape. But, the former UCLA player and current graduate student put together an outstanding performance in the U.S. Women's Mid-Amateur Championship at Berkeley Hall Club in Bluffton, S.C., finishing as runner-up after securing the final spot in match play through a playoff. We caught up with Clark to talk about her background in the game, what golf has looked like for her in New York, her run in the U.S. Women's Mid-Amateur and more.

MGA: What brought you to New York?
Aliea Clark: I’m at NYU and I’m in a dual master’s program, so I’m in film school at Tisch at NYU, so I’m getting my MFA there and I’m also getting my MBA at the Stern School of Business. It’s three years, it’s two full master’s and it’s really fun because I get to use both sides of my brain all day long.

MGA: How did you get into pursuing a film degree?
AC: I went to undergrad at UCLA. I played on the team the majority of my time there, but I graduated early so I didn’t really play my last year because I wasn’t going to be a student during our championship season. While I was in Los Angeles, I was interning at a Senator’s office and was invited to an info session at a talent agency. I went and was like, “Oh my gosh, this is a viable career option.” I thought it was so cool and fun. … I landed an informational interview with a guy who was a manager at a firm that had a putting green in the corner of their office. I came in for an interview and I brought a sleeve of my UCLA golf balls and left them on the putting green. … Someone was like, “Who brought the Pro V1s with UCLA on them?” And the guy was like, “Oh, some intern who interviewed.” They say, “Hire her!” So that’s how I got my first job and each one led to the next. … Golf has played an integral part in my life and my career from day one. I love the sport. Even though I don’t work in golf, you best believe I talk about it almost every day.

MGA: How did you get introduced to the game?
AC: My parents always loved to play. I used to kind of sit on the cart. They got me one of those old-school, first-generation digital cameras and I would take some very fun, artistic photos of grass. Then one day they left me at a clinic at Oaks North Golf Course in San Diego. I was the only girl and I beat all the boys and I was like, “This is fun, I would do this again.” I asked to go back the next week … and I then happened upon the LPGA/USGA Girls Golf group at Encinitas Ranch led by Heidi Richardson. I made a bunch of girlfriends who played golf and we all played in tournaments together. I really just started playing in tournaments as soon as I started playing. I was like 10. … The priority in my mind was one, the clothes, number two, the clothes and number three, can I hit the golf ball anywhere?

I really enjoyed playing in tournaments, being competitive. I got a lot better in high school and as I got older played in all the junior worlds events in San Diego and then was super lucky to get recruited by UCLA and play in college.

MGA: What has golf looked like for you since being in New York City?
AC: Golf looks like the 4 Train going to Woodlawn and then walking over to Mosholu or Van Cortlandt. It also looks like actively trying to get myself range time anywhere without mats as often as possible.

MGA: How did you practice for the U.S. Women’s Mid-Amateur in particular?
AC: I was taking the train out to Dyker Beach, going up to Mosholu as much as I possibly could on weekends. … I always planned on playing in the Mid-Am when I turned 25. I really love the game and am super pumped for this next phase of amateur golf in my career. … When you’re a junior or even playing in a program like UCLA, you’re expected to really want to turn pro and I just knew that wasn’t in the cards for me. But I truly love the sport and everything it teaches me about me, about others, about life on a daily basis. I really fought to get my game back during covid. I spent a lot of time back home in Carlsbad and playing golf down in Atlanta for as little money as possible because I’m a grad student. Then when I came back to New York I just had to maintain for about a month and a half before the tournament started, which I think was evidenced by that 83 the first day. No grass driving ranges anywhere really showed. I showed up in South Carolina and was like, oh no my swing.

What were your expectations entering the championship?
My expectation was to make the cut and honestly, I cleaned out my locker after my my second round on Sunday. … I tripled my last hole going bunker to bunker. It was so dumb, I was like, “I don’t deserve to be here anymore.” … I actually had a morning tee time, went to the pool for a little bit, studied for consulting interviews, then came back and watched my friends finish. One of the USGA officials was talking to me and was like, “Oh, you’re at 15-over, you’re probably going to be in a playoff.” … I had to sprint to the car, change my shoes, get my clubs and I did not warm up. I just grabbed my clubs and went to the hole. We did the playoff and I won the playoff, to then play my four-ball partner who was the number one seed.

MGA: Were there any portions of your game that clicked as you settled in and the championship progressed?
AC: I’m not going to lie to you, it was a crapshoot every day. … I would stand up and be like alright, is the driver going to go straight today or is it not going to go straight today, let’s see what’s going on. One day my driver was really great. It took me three days to actually start hitting good iron shots again. … Day four I was like, “Oh I can do this again.” … It was fun to kind of remember what it was like to hit really good shots because it took me a while to get back there.

MGA: What were your thoughts as you kept moving along in the championship?
AC: My initial thought was, “Oh my God I’m missing so much school, they’re going to be so mad at me!” Every day I would have to email my professors for the next day and be like, “I’m missing school, here’s the link on the internet, I promise I’m not just not showing up, I’m so sorry!”

I really wanted to play well, but my body was just giving out on the last day. I hadn’t played 10 rounds in eight days I think ever in my life, let alone not playing in a tournament in like five years. I was trying so hard to keep putting good swings on it, and getting the shot I wanted but my body just wasn’t cooperating. I was really tired. So, I know what to train for next year, it’s a marathon that’s for sure.

MGA: What else do you look upon as highlights in your golf career?
AC: I do remember I won my first AJGA event after a seven-hole playoff in Alabama against current Tour pro Cheyenne Knight, who is a dear friend. That was a really fun win when I was younger. But, I really think the highlights of my golf career have come for being a champion for the game and being a woman who plays, plays well, understands the game and really enjoys welcoming other people to it. … That to me is a highlight of my golf career—that I can inspire people, and encourage them to try this game that they were maybe intimidated by or didn’t think was for them. I just love that.

MGA: Any closing thoughts on golf in the Met Area for you so far?
AC: Golf in the Met Area is a real challenge. I give major props to all of my friends and people I meet who are learning how to play the game here because there are obstacles at every turn. I’m really happy having success but also living in New York. I changed my city from Carlsbad to New York with the USGA because I’m so proud of the fact that I can compete at that level, live in New York City, not be a member anywhere, and take the 4 up to the Bronx to play.