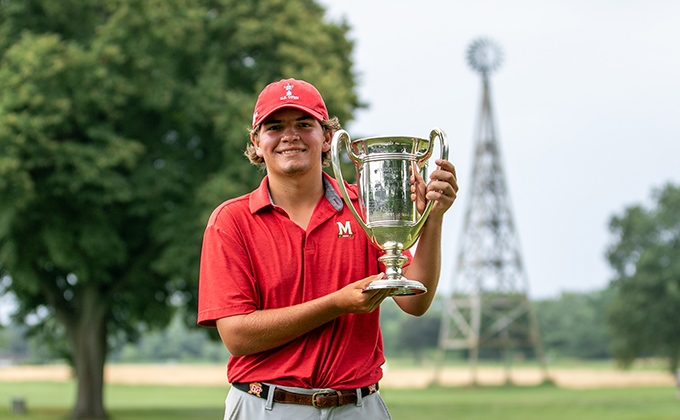 BAY SHORE, N.Y. (July 19, 2019) -- Will Celiberti of Ridgewood, N.J., put the exclamation point at the end of an impressive week of play by capturing the 102nd Met Junior Championship Sponsored by MetLife with a 3-and 2 victory over Luke Sample of New York, N.Y., Friday at Southward Ho Country Club.

Celiberti, who had rounds of 71-74 on Wednesday to tie for eighth in stroke play qualifying, followed one strong performance with another through match play. After 3-and-2 and 6-and-5 victories on Thursday, Celeberti kept it rolling on Friday morning, securing another 6-and-5 victory. The Maryland commit had all facets of the game clicking, making eight birdies in 13 holes to defeat Alex Kyriacou of Suffern, N.Y., who had played the 13 holes in 1-under par.

In the championship match, Celiberti opened hot again with birdies on Nos. 1-2, taking the first and halving the second with Sample, the 2018 MGA/MetLife Boys champion. However, as the wind picked up at Southward Ho, birdies became tougher to come by.

Sample, who defeated Jackson Fretty of Cos Cob, Conn., in 20 holes in his morning semifinal, tied the match with a birdie-three on No. 6. The two then traded Nos. 7-8 with pars winning the holes and tied No. 9 with par-threes to remain tied through the opening nine holes. The long-hitting juniors took advantage of the par-five 10th and tied once again with birdies, but Celiberti reclaimed the lead with another birdie on the par-five 11th.

Though Sample's game was a touch off down the stretch, the 16-year-old grinded through the finish, making lengthy par putts for sand saves on Nos. 13 and 15 to keep the match alive. However, Celiberti's steadiness led to pars and victories on the 210-yard par-three 14th and par-four 16th, leading to the final 3-and-2 margin and allowing Celiberti to hoist the Mandeville Trophy.

"I thought, if you hit fairways, it's not that hard," said Celiberti of his initial impressions of the course. "My driver was perfect in match play and I stuck a few shots in most of the matches, but in the third match I really got it going and it just carried over."

For Celiberti, the win means a lot, especially following his runner-up finish in the 2018 Met Junior at Siwanoy and newly learning that his family has a little history at Southward Ho.

"All summer [last year's loss] was on my mind," said Celiberti. "I was not the happiest at the end of the match last year, but it really helped. I was super nervous the whole match last year and this year I was nervous but I was used to it and it's my first win in as long as I can remember. It means the world, especially with my family coming out and my grandpa coming out," continued Celiberti. "He just told me that my dad and my uncle used to play here all the time--they grew up near here, so it means a lot."

Celiberti becomes the 10th player to go from runner-up to champion in the event's storied history, but the first to do so since Robert Mattiace in 1978-79.

Southward Ho, an A.W. Tillinghast design, was a superb host for the Met Area's top juniors all week, with its finely conditioned course serving as a stern test during Wednesday's stroke play and a fun layout for match play on Thursday and Friday. The Met Junior, which is the nation's oldest junior championship, is the first MGA championship hosted by the club.