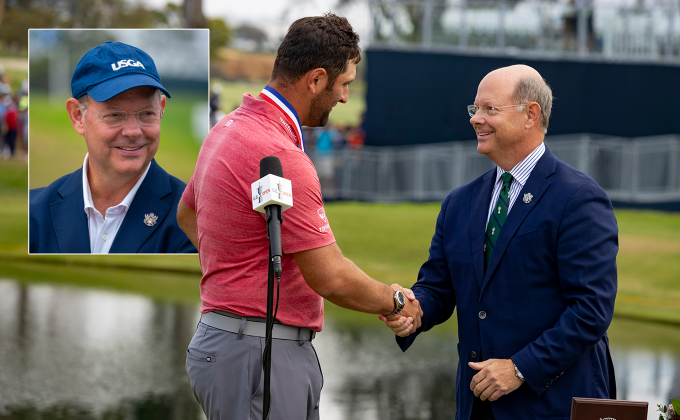 ELMSFORD, N.Y. (November 15, 2022) – The Metropolitan Golf Association is pleased to announce Mike Davis as the recipient of its 2022 Distinguished Service Award. Davis, who retired as CEO of the USGA last year, will be celebrated for his contributions to the game at the MGA’s 125th Annual Meeting and Dinner, December 7 at Westchester Country Club in Rye, N.Y.

The MGA Distinguished Service Award, created in 1973, is presented annually to a candidate who has contributed “distinguished service to golf and its related activities, consistent with the valued standards and honorable traditions of the game.” Some of its earliest winners include Joe Dey, Harry Cooper, Robert Trent Jones, Sr., and P.J. Boatwright, while names such as Dave Anderson, David Fay, Jimmy Roberts, Suzy Whaley, Jay Mottola and Jim Nantz, Dan Hicks, and Al Small have received the honor in recent years.

Davis began his career at the USGA in 1990 and has been a tireless advocate for the game of golf throughout his tenure. He became the USGA’s seventh executive director in 2011 and then the Association’s first CEO in 2016. Under his guidance and leadership, the USGA furthered its mission of serving the game by enhancing its programs, expanding its championships, and developing new initiatives, including the USGA Foundation.

Davis is profiled in the November/December issue of The Met Golfer, which details his accomplishments:

“He’s arguably best known for his U.S. Open setups, introducing graduated rough and driveable par-4s, adding “interesting” to the Open’s reputation as hard but fair. But as CEO he also oversaw the creation of the men’s and women’s Amateur Four-Ball Championships, the Senior Women’s Open, and the U.S. Adaptive Open, which debuted in July. He took USGA events to a handful of states where it had never been played before – “I really pushed that,” he said. “That was important” – and in a joint initiative with the R&A simplified the Rules and created the World Handicap System, which he says “is a bigger deal than people realize.” He was the credible crusader who led a successful campaign to ban the long and belly putters, and spearheaded the “Distance Insights” project to study the past, present, and future impact of distance in golf. Under his watch, the USGA made reducing the use of water at courses a priority and a topic of conversation within the industry, and launched the USGA Foundation so that golfers who love the game can pay it forward. The USGA in 2021 renamed its $45 million environmental sustainability initiative in his honor, as the Mike Davis Program for Advancing Golf Course Management. Davis serves as a board member of the International Golf Federation, World Golf Foundation and the World Golf Hall of Fame.”

“At the USGA, Mike was a strong supporter of the Allied Golf Associations and the MGA,” said Tod Pike, former MGA president and chair of the Distinguished Service Award committee.  “This award is how we can best thank Mike for all he’s done for the game and the MGA.”

“For over 125 years, the Metropolitan Golf Association has been the gold standard among golf associations in providing leadership and support for our great game,” said Davis. “I'm so incredibly honored and humbled to be receiving its highest award.”

Upon learning he had earned the award, Davis reviewed the list of past recipients and knows or had known 30 of the previous 49 winners. “It’s an esteemed group,” remarked Davis.

In his new chapter, Davis is pursuing his passion for golf course design and construction. He’s partnered with Tom Fazio II to create Fazio & Davis Golf Design. Their current project is a multi-course facility called the Apogee Club in Hobe Sound, Fla.

The MGA is proud to honor Davis as the latest recipient of its Distinguished Service Award.