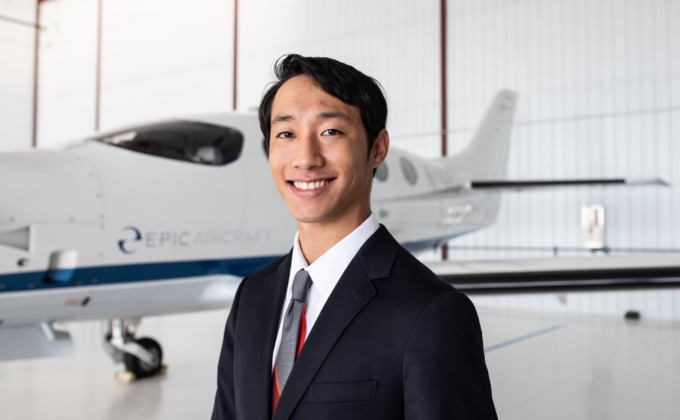 ELMSFORD, N.Y. (May 12, 2022) – The MGA Foundation is pleased to announce Eikoh Hayashi of Bronxville, N.Y. as the second recipient of the Jay Mottola Scholarship. Hayashi was formerly a caddie at Westchester Country Club during high school and is now pursuing a degree in Commercial Aviation at the University of North Dakota.

“I am extremely honored and grateful to be the Jay Mottola Scholarship recipient,” said Hayashi. “This opportunity is life-changing, and this scholarship will quite literally help me fly into the sky as a Commercial Aviation major.”

Hayashi came to the United States from Japan when he was a sophomore in high school. Originally a serious tennis player – Hayashi was ranked 193rd in the College Tennis Recruitment class of 2017 – he was introduced to golf his junior year of high school. Hayashi worked a brief 3-month internship at Metropolis Golf Club after his senior year of high school, before transitioning to caddieing at Westchester Country Club.

“As a caddie I learned so much about interpersonal relationships, and many other values,” said Hayashi. “I always enjoyed caddieing because it enabled me to meet someone new and connect with interesting individuals.”

“My family and I are delighted that Eikoh Hayashi is the second recipient of the Jay Mottola Scholarship,” said Jay Mottola. “Eikoh stood out among several very well qualified finalists. He has excelled as a student and participated in a full range of extracurricular and community service activities.  What he has accomplished since his family immigrated to the United States just seven years ago in 2015 is truly remarkable.  We know the scholarship means a great deal to Eikoh and his family and will enhance his college experience.”

Hayashi has thrived in every venture he has taken up since moving to the United States, demonstrating an intense focus and drive to succeed. Just a year and a half after learning the game of golf, Hayashi walked on to the Lafayette College Division I Men’s Golf Team. While at school, Hayashi decided to go on a Discovery Flight at Westchester Airport. Discovery Flights are short introductory flights for people interested in learning about flying or taking the first step toward earning their pilot's license.

“Then onwards, I realized that my passion was not neuroscience and that I had to make aviation my career goal,” said Hayashi.

“Eikoh is the personification of extraordinary,” said Director of the MGA Foundation, Johanna Gavin. “He has accomplished everything he has set his mind to, despite all of the obstacles that have stood in his way. His passion, and gratitude of opportunity is infectious. The Scholarship Committee is confident that this scholarship award will open new horizons for Eikoh, and he will be [quite literally] the pilot of his future.”

Hayashi transferred to the University of North Dakota in the fall of 2019 to pursue his passion for aviation. He is currently finishing up an intensive internship with Delta airlines, part of which included observing Delta’s operations in Japan.

“One of my goals is when I become a pilot, to be able to compete in golf tournaments at the locations I am flying to,” said Hayashi. “I’m just extremely excited to be able to connect my two passions (golf and aviation) through this scholarship.”

The MGA Foundation announced the creation of the Jay Mottola Scholarship in December of 2018 to celebrate the longtime former MGA executive director. Mottola was introduced to the game as a young caddie at The Tuxedo Club and supported youth caddie initiatives throughout his 40-plus years with the MGA.

“The Scholarship Committee was impressed by this year’s applicants, all of whom were exceptional scholars and hardworking young adults at Met Area facilities,” said Gavin. “The applicants are driven to succeed on and off of the golf course. It was evident that their experiences as local caddie scholars influenced their shared qualities in leadership.”

The Jay Mottola Scholarship is a significant financial grant awarded to an outstanding caddie or young person who works in service to golf in the Met Area, with representatives from local caddie scholarship funds (Long Island, New Jersey and Westchester) creating a selection committee. Sam Masters, the first recipient of the Jay Mottola Scholarship, will graduate from SUNY Binghamton with a degree in economics later this month.