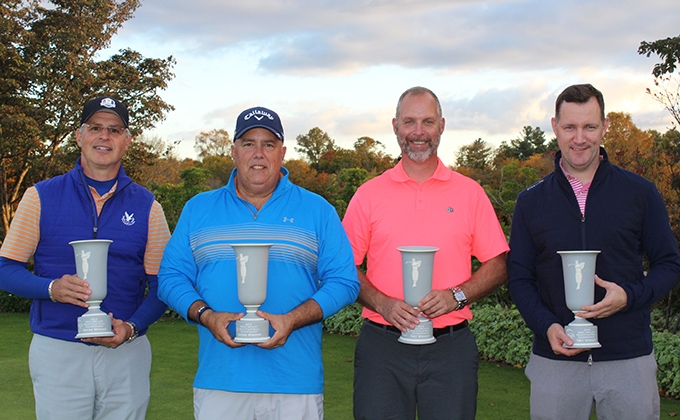 HUNTINGTON, N.Y. (October 28, 2019) - The 2019 tournament season wrapped up Monday with the 43rd MGA/MetLife Men's Four-Ball Championship at Huntington Country Club with Paul Erber and Richard Kavanagh of Ash Brook Golf Course taking home first place in the Net Division with a phenomenal 13-under, 57.

While Erber and Kavanagh's score would have won them first place in the Gross Divison as well (5-under, 65), Net Division takes priority in this tournament, and they were removed from the running for the Gross Division.

Also in the Net Divison, David Weiner and Ben Marzouk (6-under, 64) of Harbor Golf Club took second place, with Steve Vislocky and Jose Medina (4-under, 66) of Blue Hill finishing third.

For the Gross Division, first place went to Robert Senatore and Jorge Calvo of Colonial Springs with a 1-under, 69. Ryan Williams and Michael Catania of Bethpage State Park took second with a 2-over, 72, and just one shot behind, the pair of Kevin Dwyer and Chris Lodge of Mount Kisco finished third with a 3-over, 73.

Despite heavy rain on Sunday, the crew at Huntington Country Club did a fantastic job getting the course in perfect condition for the day.