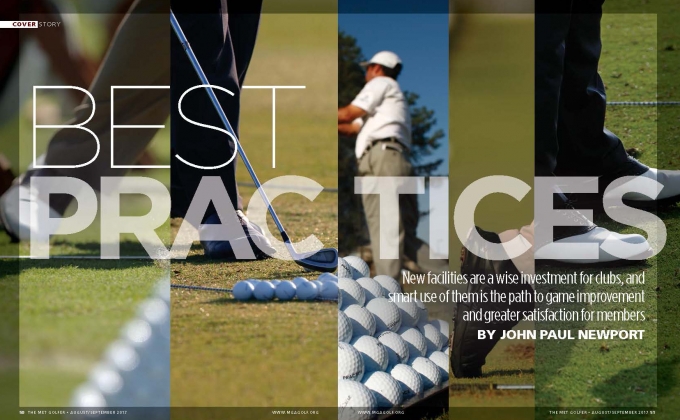 To make the most efficient use of your practice time, plan what you want to work on in advance and stick to it.  Golf instructors says that aimless practice seldom accomplishes much and can reinforce bad habits as much as it grooves good ones. As much as possible, give each shot your full attention – don’t “drag and hit.” Using games or other challenges to attach consequences to each shot helps mimic the pressure you feel in actual play, and can also practice more fun.

Most golfers underemphasize the importance of setup during practice, says Kevin Sprecher, the head of instruction at Sleepy Hollow.  At PGA Tour events, notice how many pros routinely use alignment sticks or have their coaches line them up when they hit balls.  Amateurs should do the same. Poor setup, which includes posture, grip, and ball position, leads to random compensations that in turn make consistency almost impossible to achieve.

One useful rule of thumb:  devote 60% to 70% of your practice time to the short game. “The best way to lower your score is to improve from 50 yards and in,” says Sprecher. “Unfortunately, what most people work on is the driver.”

Let’s say you have an hour to practice. Here’s the type of plan Sprecher recommends, with the caveat that any plan will depend on the current priorities you and your coach (if you have one) deem most important:

• 20 minutes on the range, working first with the short irons (perhaps starting with half shots to ease into the proper rhythm), then full shots focused on varying trajectories, and finally distance control with the mid-irons (hitting, say, a seven iron 150 yards, then 145 yards, then 155 yards).

• 15 minutes chipping and pitching from different types of lies in the rough.

Working on a new technique

Incorporating a new move into the swing is one of the few situations when “block training” – hitting the same shot over and over – can be of value. “When you’re working on something new, you need to focus on that one thing for at least 40 minutes. You can’t just do it for five minutes,” says Greg Bisconti, the head pro at Saint Andrew’s.

Adam Kugler, the 2015 Callaway MGA Senior Open champion (despite being an amateur), swears by the advice he periodically gets from James Sieckmann, a Golf Digest Top 50 instructor from Omaha and short-game guru to many Tour players. “When you’re first working on a new technique, don’t pay attention to where the ball goes. Just focus on the feel and the technique itself,” Kugler says.  In this phase, it can help to hit balls off of short tees, so that ground impact isn’t a factor.  Only after you begin to groove the feel, use the new technique to hit balls to targets.

When not working on a new technique, switch tasks frequently to keep your focus fresh. For short-game practice, don’t drop 20 balls in one spot and hit them all to the same target. Instead, says Debbie Doniger of GlenArbor, “drop 20 balls into all kinds of different lies and hit each to a different target.” Practice hitting irons from the rough, from uneven lies, and from odd lies such as in divots or when the ball is nestled against the rough collar around a green. In short, practice like you play.

Pros recommend occasionally experimentation. See what happens when you hit shots with open or closed clubfaces, making longer swings and shorter swings, or hitting with your feet together or standing on one leg. This brings your natural athleticism to the fore, and helps the body learn things directly, with less mediation from the self-conscious brain.

It can be boring, but working specifically on basics like addressing the ball can pay big dividends. “Really good players always stand to the ball the same way every time,” says David Gagnon of GlenArbor. “They place the club behind the ball and build their stance around the club in a certain order of operation. The club and the ball tell them how to stand. It’s a very simple thing, but players with 12 or 13 handicaps or higher almost never address the ball this way, and it’s a very simple thing to practice.”

Two other simple, valuable, but usually overlooked skills to practice, with or without a ball, are finishing a swing in balance and the full pre-shot routine, from sizing up the shot to the waggle and final “trigger” motion.

The rhythm of a putting stroke is every bit as important as the rhythm of a full swing, and possibly more so.  “Time the pros,” says Gagnon.  “Every putting stroke takes the exact same amount of time, whether it’s a 50-footer or a 10-footer. The ratio is always about two-thirds back, one-third through. Once amateurs start swinging the putter with good timing, they find that it's exceptionally easy to hit putts the right distance. It's just like pitching a horseshoe, oddly enough.”

To practice good timing, Gagnon recommends saying or thinking “a thousand” on the backstroke and “one” on the through stroke. This will help you make a smooth, more positive, less tentative hit on the ball, without feeling rushed or jerky.

After you’ve worked through your practice session punch list, congratulate yourself and call it a day. Practicing too long without a specific purpose can lead to lapsing focus and bad habits.