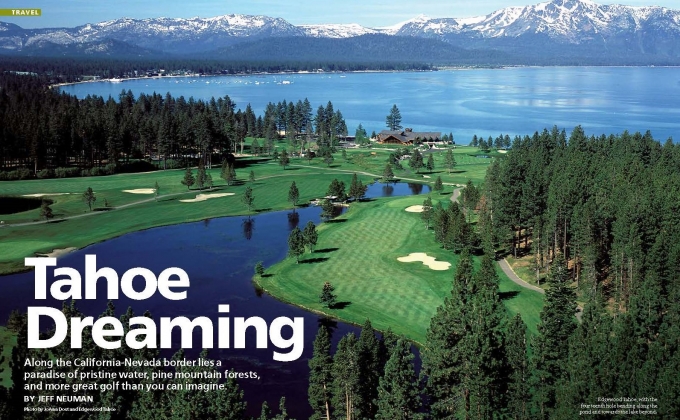 Along the California-Nevada border lies a paradise of pristine water, pine mountain forests, and more great golf than you can imagine.
By Jeff Neuman
When the dog days of August are upon us, and the haze of heat and humidity seems to have a personality of its own, it is hard to imagine there’s a place where the sunshine is bright, the air is light, the temperatures are mild and the evenings cool and comfortable. It’s a place of exceptional natural beauty where the golf courses, the lodging, and the dining options all range from simple and classic to bold and modern. It may not be the ﬁrst place that comes to mind for a golf trip, yet it’s been host to perhaps the most popular televised non-Tour event for a quarter-century.
The last clue no doubt revealed the location: It’s Lake Tahoe, the sparkling jewel that straddles the California-Nevada border and provides year-round recreation and escape for millions.  Skiers have long ﬂocked to the mountains surrounding Lake Tahoe in the winter, but increasingly golfers have joined the hikers, canoers, campers, and anglers who’ve found a broad array of options for their favorite summer activities.

“I played some of the best golf courses in the world,” says Charles Barkley, a perennial competitor (to use the term loosely) in the American CenturyCelebrity Championship at Edgewood Tahoe Golf Course. “And as far as scenery, I don’t think you can get much better than you do at Lake Tahoe. It’s a wonderful place.” At Edgewood Tahoe, that scenery rambles up the hill and down, over for a sneak glance at the lake, back up into the pines, and ﬁnally ﬁnishes with a crescendo right along the water. The George Fazio design opened in 1968 (his nephew Tom Fazio tweaks and touches it up from time to time), has hosted two USGA events (the 1980 Publinx and the 1985 Senior Open), and provides plenty of challenge from the 7529-yard back tees. (Remember that the ball ﬂies approximately ten percent farther at the 6000-foot-plus elevation directly around the lake.)

The golf course’s closing stretch is memorable for many reasons. The par-ﬁve 16th hole begins in a tight corridor of pine trees, broadening out in the landing area guarded by bunkers left and right and a single specimen pine in the right half of the fairway. Four more bunkers protect the green on the left, the right, and about 80 yards in front, suggesting a layup second despite the downhill ﬂow of the hole. Behind the green is the lake itself, and across it a spectacular view to Mount Tallac.
The par-three seventeenth runs along the lake, and so do the caddies in the celebrity tournament – a sprint to the green on 17 is just one of the fun features of that event. The 18th is a reachable par-ﬁve, but the putting surface is squeezed between a pond on the left and Lake Tahoe on the right, so the risk is at least as large as the reward.
The word “Tahoe” is used to describe a sizable geographical region around but not necessarily contiguous to the lake itself. More than 75% of the lake frontage is government-protected for-est – this despite an anti-government ethos in Nevada that one observer char-acterized as “Do whatever you want as long as you don’t scare the horses.” The lake itself is North America’s largest alpine lake, its cold clear water fed by melting snow from 63 tributaries, its only outlet being the Truckee River that runs to Pyramid Lake in Nevada. Lake Tahoe is the U.S.’s second-deepest lake, and trails only the Great Lakes in terms of size (by volume).
The towns in the area vary widely in atmosphere, part of the appeal of this region that was considered a resort area as far back as the mid-19th century. Back then, its cool air and crystalline waters provided a respite for those drawn to the potential riches from gold mining in California and silver mining at the Comstock Lode in nearby Virginia City. Today, all those outdoor pleasures are still available in abundance, but so are high-rise casinos in Stateline, Nevada; a range of culinary options in Truckee, from rustic Italian at Pianeta to multicultural tacos (Caprese? Banh Mi? Vindaloo?) at Marg’s Taco Bistro to exceptional burgers at Burger Me; and lodging that runs the atmospheric gamut from the Old West feel of the Truckee Hotel to the eye-popping villas at the Frank Lloyd Wright-designed Nakoma Golf Resort an hour north in Portola.
Even the Nevada portions of the Tahoe vicinity cater to the active California lifestyle. Hiking and biking trails abound in all directions, and watercraft from paddleboards and kayaks to waverunners and motorboats are available for hire at the well-appointed marinas. There’s far more to do around Lake Tahoe than play golf, but the game has grown in the area over the last two decades.
To the east of the Lake, on the far side of the Carson Range, is Clear Creek Tahoe in the Nevada capital of Carson City.  Clear Creek boasts a Bill Coore-Ben Crenshaw design that stretches their mini-malist philosophy across a maximalist site. The routing dips and climbs, rolls and tum-bles, with signiﬁcant challenges like the dou-ble-carry par-four 15th, a brute for all but the longest hitters, and the dropkick 17th, just 148 yards from the longest tee, but to an enormous green with many little shelves and hollows for devilish hole locations. Clear Creek is private, but a well-placed note of introduction or polite request can open the doors.
In contrast to the heavily-wooded Clear Creek, Genoa Lakes Golf Club and Resort sits just ﬁfteen miles away on the ﬂoor of an open desert valley, with jaw-dropping views of the Sierra Nevada mountains standing guard over the site. There are two eighteens, the Ranch Course and the Lakes Course, designed by Johnny Miller and Peter Jacob-sen respectively (both working with John Harbottle III). The Ranch Course cuts into the foothills and features signiﬁcant eleva-tion changes, while the Lakes Course is can-nily routed around the Carson River and calls for thoughtful shotmaking.
The options are even more varied to the north of Lake Tahoe. Incline Village Cham-pionship Course is a Robert Trent Jones design with spectacular views; it was reno-vated in 2003 by Kyle Phillips and has appeared on Golf Digest’s“Best in State” lists. In Truckee, Schaeffer’s Mill was selected by Golfweek as one of the ten best new courses nationwide in 2009; this Miller/Harbottle course spends nine holes wandering attractively through a meadow before heading into the mountains for the second nine.
Truckee also has Old Greenwood, a Jack Nicklaus signature course; Coyote Moon, routed by Brad Bell through the mountain terrain of pine forests, granite outcroppings, and Trout Creek; Gray’s Crossing; and Tahoe Donner, a haven for summer activities and concerts. And up in Portola are Nakoma Resort’s Dragon Golf Course, with stunning views from every tee, and Grizzly Ranch, laid out by Bob Cupp in a challenging and strategic design that was rated the top public-accessible course in the Sierra Nevadas by Golf Digest.
All of these courses, activities, and views make Tahoe an irresistible attrac-tion. And, as Fodor’s Travelnotes, “Tahoe is now an easy-access playground for East Coast travelers, thanks to JetBlue’s new nonstop ﬂights between New York’s JFK and Reno-Tahoe International Air-port.” That route began service in May, and it makes Lake Tahoe a feasible desti-nation for even a long weekend. If you’ve ever visited, you understand why Mark Twain called it “surely the fairest picture the whole world affords.” If you haven’t, “I’d rather be golﬁng” is no excuse.