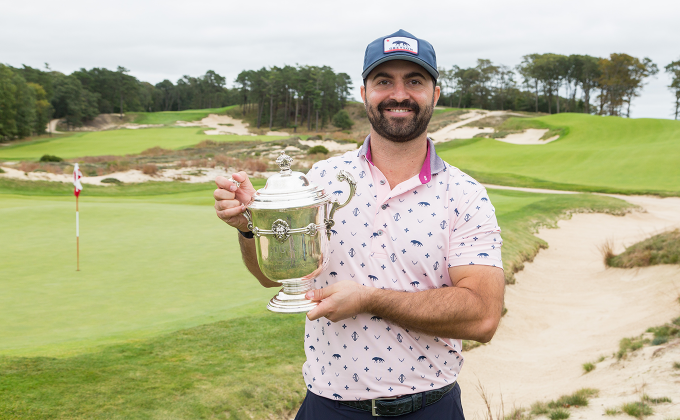 BAITING HOLLOW, N.Y. (October 5, 2021) -- A 4-under 67 in the final round of the 15th MGA Mid-Amateur Championship led Chris DeJohn of Arcola to a one-shot victory over Ken Bakst, Tuesday at Friar's Head. DeJohn used four birdies over a five hole stretch through the middle of his round to jump up the leaderboard, while two more birdies later in the closing nine led to DeJohn's 7-under tournament total and first career MGA title

Following his 3-under 68 to open the championship, DeJohn began the final round one shot behind Bakst. Despite an admitted slow start, DeJohn found his groove late in the first nine. The 34-year-old converted a trio of birdies as he made the turn, allowing him to catch Bakst at 5-under.

"The beginning of the round was a little frustrating, I missed a few birdie putts then three-putted the par-3 [fourth]," said DeJohn, who regained his amateur status in 2020. "I just hit a couple good shots into the par-5 [seventh] and two-putted for birdie. I hit a really good shot into eight, was able to convert that and then I hit one really tight on nine and was able to get that to go and that just gave me some momentum to kind of get the round going."

Behind him, Bakst converted birdies on Nos. 2 and 6 and also had a bogey on the par-4 5th to make the turn in 1-under.

Meanwhile, Bakst broke a string of eight consecutive pars with a birdie on the par-4 15th. The Friar's Head founder and managing member had more looks coming in, but couldn't get another birdie to fall, including one on the 18th that came up just short and left DeJohn atop the leaderboard.

"I was very fortunate to have a good week and play well out there. It's just awesome and is definitely one of the highlights of my golfing career," said DeJohn. As the champion, DeJohn was presented with the Westmoreland Cup  from its namesake Gene Westmoreland, the longtime MGA Tournament Director that was instrumental in establishing the championship.

Behind Bakst, two-time MGA Mid-Amateur champion Trevor Randolph finished solo third at 1-under to round out those finishing the 36-hole championship in red figures. Colin Dolph of Nassau and Michael Auerbach of Bellport tied for fourth at even-par. Dolph closed with a 3-under 68 while Auerbach turned in the low round of the championship with a 5-under 66.

"This is hands down one of the top courses I've ever played," said DeJohn. "Everytime I'm here I think it's incredible. Even without the views, it's just such a special layout and it was in such good shape. Mostly I've played here in the summer, so to play here in the fall when it's a little cooler was relly special and to be able to come away with the victory and hit the ball solid was awesome."

Much of the field echoed DeJohn's sentiments about Friar’s Head, which ranks No. 13 and No. 16 in GOLF and Golf Digest’s respective top 100 U.S. courses lists. Friar's Head was welcoming its third MGA championship, having previously hosted the 2008 Met Amateur and the 2015 Ike. The 2002 Bill Coore and Ben Crenshaw design wowed competitors. Even with rain prior to each round, conditions were outstanding, with the greens especially drawing the field’s attention.

The MGA Mid-Amateur Championship debuted in 2007 at Hudson National and has since visited some of the region's most respected venues, with Maidstone Club, Wee Burn Country Club and Somerset Hills Country Club hosting the most recent playings. In 2022, the championship will return to The Tuxedo Club in Tuxedo Park, N.Y.