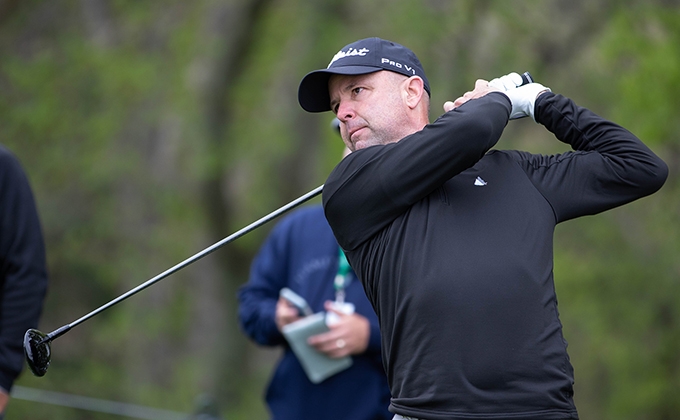 FARMINGDALE, N.Y. (May 17, 2019) -- Following his stellar 1-under 69 Friday that allowed him to make the cut, GlenArbor Director of Golf Rob Labritz put together two more quality rounds at Bethpage Black over the weekend en route to earning Low Club Professional honors for the second time in his career at the PGA Championship.

Labritz carded rounds of 74-72 over the weekend to finish 10-over and tied for 60th overall, besting his fellow club pros Ryan Vermeer (+15) and Marty Jertson (+19) who also made the cut. Labritz finished as Low Club Professional in 2010 at Whistling Straits, but there's no doubt this finish will have special meaning thanks to its proximity to home and his success in claiming three New York State Open titles at the venue.

Labritz went above and beyond in his preparation to just make the field at Bethpage. "We made it our point to even during the winter, every other week I would travel down to Florida and work out at the PGA Village, hitting golf balls, playing in tournaments, playing the winter series," said Labritz after his final round, which was his 73rd competitive round on the Black Course. "You know, I didn't see my family much this winter. It was a big sacrifice because we wanted to make sure my game was sharp enough to compete."

The preparation certainly paid off for Labritz, who collected the crystal bowl on the 18th green just before Brooks Koepka hoisted the Wanamaker Trophy.

The 47-year-old also made sure to enjoy himself throughout what was his sixth PGA Championship appearance. "I love getting the crowd behind everything here," said Labritz after his third round. "I love interacting with them. I'm a PGA pro, I'm not a TOUR player. So, any bit that I can do this and make everybody's day and make them have a good time out here and get the crowds going, that's what I'm all about."

FARMINGDALE, N.Y. (May 17, 2019) -- After opening the 101st PGA Championship with a 5-over 75, GlenArbor Director of Golf Rob Labritz faced a tough challenge ahead in order to make the weekend at Bethpage State Park. While it may've been a tall order for many, Labritz put his experience and success on the Black Course to good use as he fired a 1-under 69 on Friday to make the cut on the number at 4-over 144.

Labritz, a three-time New York State Open champion on the same grounds making his sixth PGA Championship start, began his second round with a bogey on the par-four 10th, but tallied consecutive birdies on the lengthy par-four 12th and following par-five 13th. He gave one back with bogey on the notoriously challenging par-four 15th, and made the turn to the outward nine in even-par.

Birdies on the par-three 3rd and par-five 4th pushed Labritz to 2-under for the day. Despite a bogey on the par-four 6th, Labritz otherwise held strong down the stretch en route to his 69.

"I'm not the guy who's going to kick himself," said Labritz, 47, following the round. "I've leared over the years not to kick myself. I shot what I shot. We'll see if it's good enough. Played my heart out," he said, having to wait nearly a couple of hours to see whether the number earned him two more rounds.

Once official, Labritz, his family and friends celebrated his second made cut at the PGA Championship. His other came in 2010 at Whistling Straits where he finished as Low Club Professional. Labritz tees off at 8:40 a.m., alongside Canada's Corey Conners.

FARMINGDALE, N.Y. (May 17, 2019) -- Following Thursday's opening round at Bethpage Black in the 101st PGA Championship, Met Area professionals in the field will eye making the cut. Jason Caron of Mill River used his experience on the Black Course and continued his stellar play as of late with an even-par 70 in the opening round. Tyler Hall of Upper Montclair also placed himself in good position for a chance to make the weekend, carding a 2-over 72 on Thursday.

Brian Mackey of Hollow Brook posted 74 in his first PGA Championship round, while Rob Labritz of GlenArbor posted 75, and Alex Beach of Westchester and Danny Balin of Fresh Meadow 77 and 78, respectively.

FARMINGDALE, N.Y. (May 15, 2019) -- The Met Area contingent of club professionals once again excelled in the PGA Professional Championship, with six logging top-20 finishes at Belfair in South Carolina to earn their spot in the field at Bethpage Black this week for the 101st PGA Championship.

Alex Beach, in his first season at Westchester Country Club, edged new Fresh Meadow Country Club head professional Danny Balin by two shots to capture the title. A closing 3-under 69 led him to the top and led him to his second PGA Championship start.

The familiar names continued to crowd the top of the leaderboard, as Jason Caron finished tied for fourth and both Rob Labritz and Brian Mackey finished even-par for the championship to tie for eighth. Meanwhile, Tyler Hall edged out the final slot, besting another pair of Met Area pros in what began as a 6-for-2 playoff with a spot at Bethpage on the line.

Follow the players this week as they tee it up alongside the world's best in their own backyard.