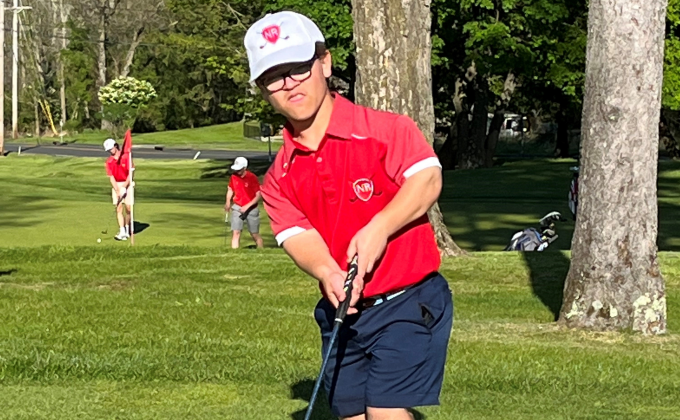 This article was originally featured in the June/July edition of The Met Golfer.

Thiells, N.Y. (June 17, 2022) -- If you tell Ian Posillipo he can’t do something, you’re making a mistake. Don’t let Ian’s size fool you, when it comes to competition there is no one fiercer. Ian has achondroplasia, a condition that impairs the growth of bone in the limbs and causes abnormal growth in the spine and skull. Standing at four feet three inches, Ian has been underestimated his whole life, but instead of letting that get him down Ian chooses the alternative route.

“I hate to lose,” says Posillipo. “When people make fun of me or underestimate me, it eats into me and that makes me really want to work. People have been doing that my whole life and I just go out and show them they’re wrong every time.”

Ian is a sports nut and as competitive as they come. Currently 15 years old and a sophomore in high school, he plays on the North Rockland H.S. hockey team as well as the school’s golf team. Ian plays regularly for the team, and according to head golf coach William Branti, he thrives.

“No one competes harder than he does,” said Branti. “He’s a bulldog. But he’s also a joy to be around. I’d say he’s the most popular kid on the team and you can’t help but have a smile on your face when you’re around him.”

“He’s like Corey Pavin, I think his nickname was the bulldog,” said Laudien. “That’s why golf is great, there is such a big mental component to it. He might not be the [longest] hitter, but no one is going to outwork him or be able to get into his head.”

Laudien is a big reason why Ian has thrived since seriously taking up golf roughly three years ago. When he first started playing, he was using a set of junior clubs because they were the right height – but because of Ian’s strength, the flex of the shafts did not match his capabilities. That’s where Laudien came in.

“He started cutting down clubs and making a custom set for Ian,” said Sharon Posillipo, Ian’s mother. “He’s a busy guy and he went well out of his way to make that happen for Ian. That’s the biggest hurdle for him, they don’t make clubs for someone his size who is as strong as he is.”

Even with that obstacle, Ian never complained. He practices constantly, hitting balls on the range all summer and doing the same at his home simulator in the winter. He’s a member of Youth on Course, a program with which the MGA Foundation has partnered that allows junior golfers discounted access to courses throughout Rockland County and all around the Met Area. Shortly after Ian received the custom set of clubs from Laudien, he broke 90 for the first time. While the clubs aren’t perfect – Sharon is still actively looking to help Ian secure a set that suits his game – Ian has steadily improved.

“My biggest goal this year is to break 80,” Ian says. “I shoot around 85 most rounds so I want to keep getting better in all areas and shoot something in the 70s for the first time this summer.”

Despite his competitive fire and constant drive to get better, Ian says he enjoys golf because he can just have a good time. Both his dad and older brother Matthew, who also played on the high school team at North Rockland, are avid golfers.

“Golf is just a lot of fun to play,” says Ian. “Sometimes I get angry because I always want to be perfect, but that’s impossible in golf and I realize that. I play a lot with my friends and that’s the best part about it to me.”

Still, for every friend that Ian has made through golf, there are always those who doubt him because of his stature. Sharon noted several times when Ian would get paired with a group at a course, and she could see people questioning what was going on. That’s before they all
tee it up; after 18 holes their preconceived notions have been driven away.

“You just have to get to know him, and you certainly can’t judge a book by its cover,” Sharon says. “As a whole, the golf community has been so accepting of him. There will always be those people that don’t think he can do it, but Ian will just prove them wrong as well.”

“When we show up to the courses for matches, you see people look, you see people stare, even the opponents,” says Branti. “By the end of the round they’re all high-fiving. Ian just wins them over with his personality and drive to be better. Nothing intimidates him. I wish I had a little bit of Ian in me to be quite honest.”

Ian is a noted prankster, never failing to make people laugh. He’s an agitator in the best way possible and makes those around him better.

“I’m not just saying this because I’m his mom, but it’s impossible not to root for him,” says Sharon. “He has overcome so much in his life already and h never makes excuses. He is truly an inspiration to me and to a lot of people.”

Ian champions the idea that golf is for everyone, hurdling obstacles at every turn and showing that on the golf course, if you put your mind to it, you can compete no matter the odds. Never tell Ian Posillipo he can’t do something. He’s heard that enough and it hasn’t fazed him yet. For anyone who has doubted themselves on the course or off, Ian’s message is to
just block out the noise and get to work.

“The only way you can’t do something is if you don’t try,” says Posillipo.