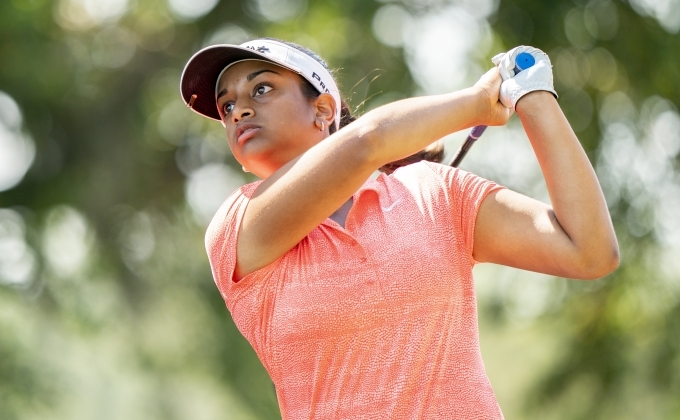 ELMSFORD, N.Y. (February 9, 2021) -- New Jersey's Megha Ganne has accepted an invitation to compete in the 2021 Augusta National Women's Amateur. Ganne, 16, is one of 85 players that have accepted invitations for the championship, March 31 - April 3 in Augusta, Ga.

Ganne had also accepted an invitation to compete in the championship's second playing in 2020, but it was cancelled due to the effects of the global COVID-19 pandemic.

“On behalf of the membership at Augusta National, it is my distinct honor and privilege to welcome these talented competitors to the 2021 Augusta National Women’s Amateur,” said Fred Ridley, Chairman of Augusta National Golf Club and the Masters Tournament. “While the wait for the return of this championship has been longer than expected, the excitement generated by the sportsmanship and competitive spirit showcased in the inaugural edition still resonates with us today. We look forward to hosting this elite field this spring and showcasing the future of the women’s game.”

Ganne is no stranger to Augusta, having advanced to the Drive, Chip and Putt National Finals four times. After a stellar 2019 in which Ganne advanced to the semifinals of the U.S. Women's Amateur Championship, the Holmdel native and past MGA/WMGA French-American Challenge competitor had an outstanding 2020 season as well. Ganne logged a trio of top-five finishes in junior events, including a third-place and T-3 finish at the AJGA Girls' Championship and Rolex Tournament of Champions, respectively. She also advanced to match play at both the 2020 U.S. Women's Amateur and North & South Women's Amateur Championship, and competed in the ShopRite LPGA Classic.

Beginning the week prior to the 85th Masters Tournament, the international field will compete across 54 holes of stroke play, with a cut to 30 players taking place after 36 holes. The first two rounds will take place on the Island and Bluff nines at Champions Retreat Golf Club on Wednesday, March 31 and Thursday, April 1. The entire field will then play Augusta National for an official practice round Friday, April 2. The final round will take place at Augusta National on Saturday, April 3 and will feature the competitors who made the cut.

Jennifer Kupcho, who now competes on the LPGA Tour, was the champion of the inaugural championship in 2019. The 2020 Augusta National Women’s Amateur was cancelled due to the effects of the global COVID-19 pandemic.