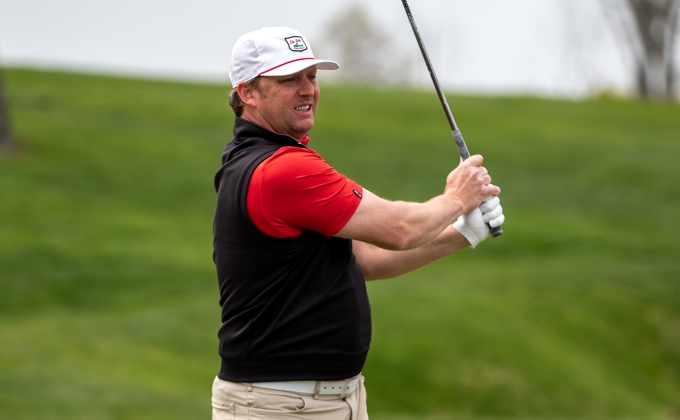 Guyton's round included a field-best six birdies. Though Guyton, head professional at Rockville Links Club, sprinkled in four bogeys, he closed both of his nines strongly, placing back-to-back circles on the scorecard on both Nos. 7-8 and Nos. 17-18.

"I just hit it pretty solid, kind of kept it in play most of the day and hit a lot of fairways, greens," said Guyton. "I putted really well. These are some of the best greens that I've seen around here especially this year."

"The greens were rolling perfect," said the Meadow Brook Club assistant Wilson, echoing comments from much of the field. "It felt like they were 13 or 14 out there in places, so you had to be in the right spots, even chipping to be able to get up and down. Luckily, I was able to manage that pretty well today and was able to get up and down where I needed to and birdied the par fives."

Past Ike champion Lowe also admitted that his scrambling game led to his quality score, saying, "I for the most part left myself in spots that wouldn’t kill me and I got up and down practically every time. I was fortunate my short game was there because there hasn’t been much work that I’ve been able to put into it."

Meanwhile, Benitez has played strong as of late, finishing T-19 last month in the 61 Abierto Mexicano de Golf. His four birdies helped offset a double and a pair of bogeys.

Jesse Fitzgerald of Garden City, N.Y., and Gerald Mackedon of Port Jefferson, N.Y., secured the final two slots in a 3-for-2 playoff, doing so on the first hole. The Garden City Golf Club assistant Fitzgerald drained 35-footer for birdie on the short par-4 first, while Mackedon, who just started his professional career at West Hampton Country Club, made par to earn his ticket to final qualifying. They both shot 1-over 71 along with amateur Christopher Manzello of Farmingville, N.Y., who took the first alternate spot.

Peter Procops of Lawrence, N.Y., earned the second alternate position, emerging from a 5-for-1 playoff among those carding 2-over 72. Procops made pars on Nos. 17 and 18, a three and a four.

The MGA has four remaining U.S. Open local qualifying rounds, all taking place between May 3 and May 10. The MGA will then conduct final qualifying for the 121st U.S. Open Championship at Old Oaks Country Club and Century Country Club in Purchase, N.Y., on June 7.