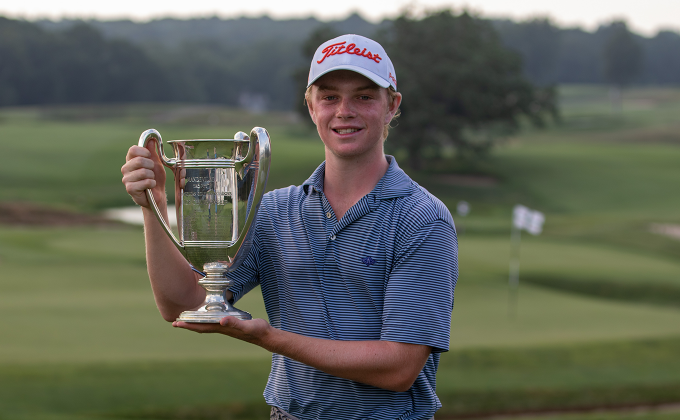 EAST SETAUKET, N.Y. (July 21, 2022) – John Hiller of New York City earned the redemptive victory on Thursday, winning the 105th Met Junior Championship Sponsored by MetLife by a 2-and-1 margin over Tyler Lee a year after finishing as runner-up.

The match was tightly contested throughout as neither player earned more than a 1-up lead until Hiller’s match-clinching birdie on the par-3 17th. For Hiller, his runner-up finish in 2021 not only served as fuel for the week, but also provided valuable lessons for his march to victory.

“Not only did it motivate me to come back here for revenge and win this year, but I was definitely banking on that experience the entire round today—just focusing on my own game rather than my competitor and it really paid off having that experience,” said Hiller thinking back to his runner-up finish at The Tuxedo Club.

Both players won a pair of holes on the first nine, while tying the par-5 second and par-4 fifth with matching birdies. Lee, the on-site stroke play medalist and Franklin Lakes, N.J., native who was competing in match play at the championship for the third consecutive year, bounced back from a long tee shot on the par-3 ninth that flew out of bounds by knocking his approach close and winning the par-4 10th hole with a birdie.

However, play was then suspended for 2 hours, 15 minutes as dangerous weather settled into the area. The match resumed at 4:40 p.m., with Lee tugging his tee shot on the par-3 11th out of bounds. Hiller took advantage of the miscue there and again on the par-4 13th following an errant shot from Lee and quickly regained the lead for the first time since the third hole.

“For the first hour I sat there and kind of relaxed on my phone,” said the 16-year-old Hiller. “Then I kind of got into it. I went out there and started firing. My mindset ended up paying off.”

While a three-putt for Hiller on the par-4 14th tied the match once again, Hiller made a short one on the following par-3 15th to keep the two tied.

Both players tried to blast their tee shots near the green of the short par-4 16th and found awkward shots. Lee’s bounded well right into a greenside bunker on the par-4 13th, from where he took two shots to get on the green. Hiller, meanwhile, found the green with an awkward sidehill chip where his stance had to be in a bunker. Two putts from there earned him a 1-up advantage with two to play.

Hiller then played the par-3 17th, which features a small green and deadly false front with two bunkers well below the surface of the green, to perfection, hitting his tee ball past the hole and draining the putt for the victory.

“I just kind of played it safe and hit it to the back of the green,” said Hiller. “I ended up making the putt which was probably the first putt I really ended up making all day, but it was a good shot to finish off the tournament.”

Hiller felt as if his play off the tee all week played a role in his victory, saying, “Off the tee I was really solid, just bombing drivers everywhere and I was hitting it straight, which is really all that matters. You can’t really go wrong with long and straight.”

Hiller had advanced to the final behind a 2-and-1 morning semifinal victory over CJ Merritt of Plainview, N.Y., while Lee had defeated Derek Gutierrez of Cranford, N.J., by a 4-and-3 margin.

Hiller’s victory marks the 12th time a player has gone from runner-up to champion in consecutive years in the Met Junior. It’s the third time in the last four years, with Will Celiberti (2019) and Luke Sample (2020) also accomplishing the feat.

With the win, Hiller will also receive 250 points in the race for the MGA Junior Player of the Year Award, Presented by Callaway. The award was established in conjunction with the 100th Met Junior in 2017 to recognize excellence among junior competitors in the Met Area.

The MGA Foundation conducts the Met Junior as part of its extensive youth programming, which is supported by MetLife. MetLife’s particular support of the MGA Foundation is a testament to the company’s longstanding mission of giving back and allows the MGA Foundation to continue instilling the values and traditions of golf in the next generation of golfers through a variety of innovative programs and junior championships.

The list of Met Junior champions to hoist the prestigious Mandeville Trophy includes the likes of Butch and Bill Harmon, Marc Turnesa and more recently Michael Miller and Cameron Young.

This was the fifth MGA championship hosted by St. George’s Golf & Country Club, and the third time the club has hosted the Met Junior. Players, including Hiller, shared their appreciation of the course and experience on it throughout the week.

‘It’s a really beautiful layout,” said Hiller. “There’s not many trees to set up the visual lines, but the fairways really set up to my eye and I really enjoyed it all six rounds that I played.”

The classic Devereux Emmet layout has gone relatively unchanged from Emmet’s original design, with Gil Hanse having worked with the club on for more than a decade. “It’s one of my favorite golf courses in the world,” says Hanse. “Every time I go to St. George’s, it puts a smile on my face. It’s got so much character and elements you would have never seen before, but it all works and it’s been a solid test of golf from the beginning.”