BRIDGEHAMPTON, N.Y. (June 26, 2012) - Big names aren’t difficult to spot among the leaderboard at the 2012 Ike Championship presented by Canon 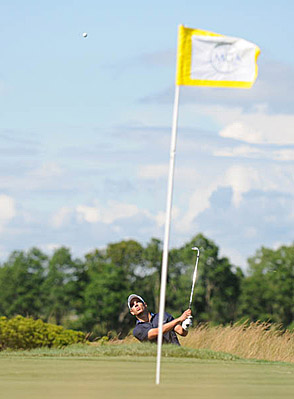 Business Solutions. The 57th edition of the premier Met Area stroke play event delivered the goods on Tuesday, June 26, a day after severe rain and thunderstorms put a stranglehold on the tournament and cancelled the opening round.

The howling winds at Atlantic Golf Club were the story for most of the day, but as the afternoon unfolded, full attention turned to the players. Five of the best amateurs in the Met Area rose above a field of 104 to tie for the top spot heading into the 36-hole finale on Wednesday, June 27. Ryan McCormick of Suburban, who recently won the NJSGA Amateur, posted the lone 1-over 73 out of the morning flight, and it wasn’t followed until 2011 Met Junior champion Charlie Edler of Rumson turned in one of his own in the afternoon, which included a 3-under 34 on the front nine.

“I played great today, and it could’ve been a pretty special round, unfortunately I kind of threw away some shots,” McCormick said. “It played tough on putting especially. You know a lot of guys have played in some sort of wind and know how to maneuver the ball around, but putting is tough.”

Long Island native and 2011 Ike Championship runner-up Joe Saladino of Huntington joined the log jam with a steady two bogey, one birdie performance, while 32nd- ranked amateur in the world Mike Miller of Knollwood, who was paired with Saladino, added his 73 to the mix. 2011 Met Am runner-up Sam Bernstein of Century will also enter Wednesday with a share of the lead.

Of all the players in contention, perhaps no one has better vibes at Atlantic Golf Club than Saladino. The two-time MGA Player of the Year who advanced to the Round of 16 at the 2010 U.S. Mid-Amateur played here.

"I hit the ball pretty solid today, just tried to focus on having a good tempo out there," he said. "I felt very relaxed. I gave myself a lot of chances, but just hit a lot of good putts that went over the edge.

Miller, the reigning MGA Player of the Year, also came away pleased with how his day progressed.

I'm thrilled, I'm right in it," he said. "And that's what kind of day it was, to post a good number. It's not a sprint, it's a marathon, so I'm excited. Playing with Joe, he's a great player and he played great today. He should've shot four or five under but he didn't make anything."

A total of 41 players made the cut after battling difficult 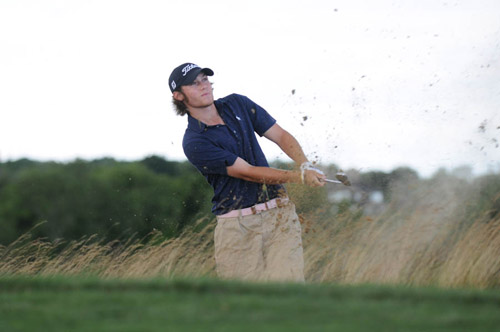 scoring conditions on the picturesque East End track. Although perfectly conditioned, Atlantic didn’t surrender many birdies, due to relentless winds that were blowing consistently between 20 and 25 miles per hour.

Five players are in great shape and only one off the lead after firing opening-round 74s, including 2012 U.S. Open participant Cameron Wilson of Shorehaven, St. John’s University junior Pat Wilson of Panther Valley, Ned Zachar of GlenArbor, Dan Levinson of Bayonne, and Hal Berman of Middle Bay.

Gregg Angelillo of Baltusrol, Mike Stamberger of Spring Lake, and Bryan Pendrick of Nassau opened their Ike campaigns with 3-over 75s. Xander McDonald-Smith of Marine Park, 2007 Carter Cup champ Max Buckley of Westchester, and Ian Palfrey of Siwanoy are only four shots back after solid 76s.

Complete coverage of the Ike Championship presented by Canon Business Solutions is available at www.mgagolf.org, where you can also find live scoring for the final round. Also follow the Ike via My MGA Mobile App and through the MGA’s Facebook and Twitter (@MGA1897) pages.