SUMMIT, N.J. (June 4, 2012) – Stanford University sophomore standout Cameron Wilson took home medalist honors with an impressive 36-hole score of 136, and was one of four players who punched their tickets to the 112th U.S. Open at The Olympic Club in San Francisco, Calif., June 14-17. The 19-year-old Rowayton, Conn., native opened with a 1-over 71 on Canoe Brook Country Club’s South Course, but closed with a blazing 7-under 65 on the North Course. Former Nationwide Tour winner Jim Herman of Palm City, Fla., placed second with a total of 137 while New Jersey club professionals Mark McCormick of Morristown, N.J., and Brian Gaffney of Rumson, N.J., tied for third with totals of 138.

"I’m so pumped right now,” said Wilson, the 2009 Met Amateur and 2009 MGA Player of the Year. “My morning round was pretty mediocre. I made a bunch of birdies but I seemed to give one away after each one," Wilson said. "And I had four or five vicious lip-outs. When they started to fall early on in the second round, it just got the ball rolling.

And that’s exactly what Wilson did, recording 13 birdies on the day and a staggering nine in his second round. After he returns to Stanford on Tuesday to finish up his finals prior to the Open, he will have a short trip from the Palo Alto campus to the Olympic Club.

Lightning and heavy rains caused a one hour, 50-minute delay starting at 9:25 AM, and after the delay the field of 73 players was able to take advantage of receptive greens. Herman, a 34-year-old former assistant pro at Trump National-Bedminster, played nearly flawless golf, suffering only one bogey in 36 holes. He opened with a 2-under 68 on the South and followed it up with a 3-under 69 on the North. This will be Herman’s second U.S. Open, as he qualified here at Canoe Brook for the 2010 U.S. Open at Pebble Beach.

“That Open was my first tour event so I had to get over the shock factor,” said a confident Herman, who had many Trump National members in his gallery cheering him on. “Now after playing out on Tour for a couple years I’ll feel more comfortable, and I’m excited to see Olympic. I’m sure it will be a great test.”

McCormick, who’s in his 13th year as the head pro at Suburban Country Club in New Jersey, will be competing in his first major championship. The 49-year-old opened with a 3-under 67 on the South and followed it up with a solid 1-under 71 on the North. Afterward, he said he thought his son, Ryan, who was also in the field, had a much better shot than making it than he did. (Ryan finished T31 with a total of 146.) 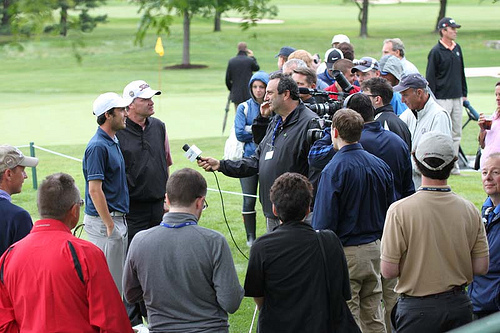 e [Ryan] was playing so good, I was confident he was going to qualify," he said. "It was just kind of strange, because you just never know. You get momentum, you lose momentum and when you get momentum going you feel like you can make birdies on every hole.”

The U.S. Open won’t be the first high-pressure professional tournament for Gaffney, the 2011 New Jersey PGA Player of the Year. Now in his seventh year as the head pro at Rumson Country Club in New Jersey, the 41-year-old competed in both the 2000 and 2009 PGA Championships.

“It’s pretty cool, but I think it’s going to be a lot harder,” he said. “I think it personally validates all my hard work. That’s what this event is, it’s fun and exciting and a chance to play in another tournament because I don’t get a lot of chances like this.”

Blaine Peffley of Lebanon, Pa. won a four-hole playoff for first alternate honors and Rich Berberian of Derry, N.H. will be the second alternate.

Players with Met Area ties that qualified for the U.S. Open at alternate sites include the 2005 MGA Carter Cup champ Morgan Hoffmann. The former All-American at Oklahoma State got into the qualifier at Columbus, Ohio as an alternate and wound up placing T14 after shooting 69 and 71.

This will conclude Canoe Brook’s three-year rotation as the host of the MGA-conducted U.S. Open sectional qualifier. It will return to Old Oaks Country Club and Century Country Club in Purchase, N.Y., in 2013.