NEW ROCHELLE, N.Y. (June 25, 2013) – Cameron Wilson of Shorehaven took a page from his own book Tuesday when he claimed his second 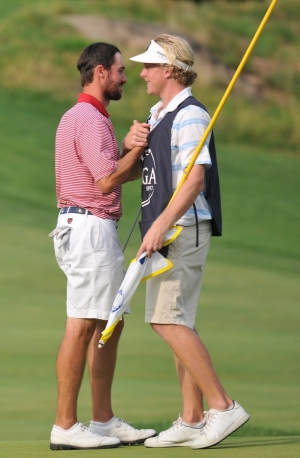 The Rowayton, Conn. native’s marathon day in 90 degree heat was made a bit more comfortable since he managed to tally 11 birdies in 36 holes of action, and 19 total birdies in the Met Area’s premiere amateur stroke play event. His second round 7-under 65 matched the competitive course record he set last year at Atlantic Golf Club, and his 203 total tied five-time MGA major winner (and PGA Tour player) Johnson Wagner for the lowest 54-hole total in Ike history. He's the first repeat champion since Mike Ballo Jr., won in 2009 and 2010.

“I’m very happy to win this tournament, especially twice in a row,” he said. “This morning I played really well and didn’t make a lot of mistakes. I kept trying to hit one good shot after another and it worked out at the end.”

It didn’t hurt that Wilson had three-time MGA major winner Tommy McDonagh on the bag the past two days. The two of them combined to win the 2011 and 2012 Ike Team Championships and the last three individual Ikes.

“Tommy and I are great friends on and off the golf course,” Wilson said. “He obviously knows what it takes to win these tournaments. He was fun to have around this week.”

It was a two-man race for much of the afternoon as last year’s Ike runner-up and 2013 NYC Amateur winner Max Buckley of Westchester was nipping at Wilson’s heels. He got it as close as two shots after birdies on one and two but a double bogey on the par 3 16th derailed his chances at catching Wilson.

“I knew I was a few shots behind and the whole plan this afternoon was to play as aggressive as possible,” Buckley said. “He made six birdies in the first 11 holes (in the morning) and had the pedal to the medal, but I played well, and I’m happy with the way I played."

Added Wilson, “Max is an awesome player and he played awesome golf. I remember in the Carter Cup about six or seven years ago he beat me by two or three, and that was despite me making a hole-in-one.” 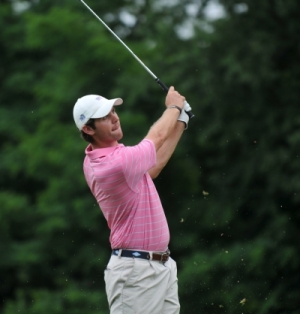 Sam Bernstein of Century eagled his 54th hole to tie two-time MGA Player of the Year Mike Miller of Knollwood at 211 for third place. Brandon Dalinka of MGA eClub – N.J. came in fifth with a total of 215, while Wake Forest bound Danny Guise of MGA eClub – Conn. came in with 218.

Buckley and Stu Kaufman (who finished in 13th) of Westchester Country Club took home the Ike Team Championship with a combined score of 430.

The Ike Championship is the MGA’s premier amateur stroke play championship, and five sectional qualifying rounds were held to determine the events final field. The beautifully manicured Wykagyl Country Club, which has hosted six previous Ikes, challenged today’s players with its extremely fast and undulating greens. It played to a par-72 of 6,623 yard.

Thanks to more than a dozen scoring volunteers, live hole-by-hole updates were provided throughout the entire final round. For player interviews, video highlights, photo galleries, course statistics, and more coverage of the 2013 Ike, please visit mgagolf.org.