Kugler Comes from Behind to Claim Senior Amateur

Kugler Comes from Behind to Claim Senior Amateur 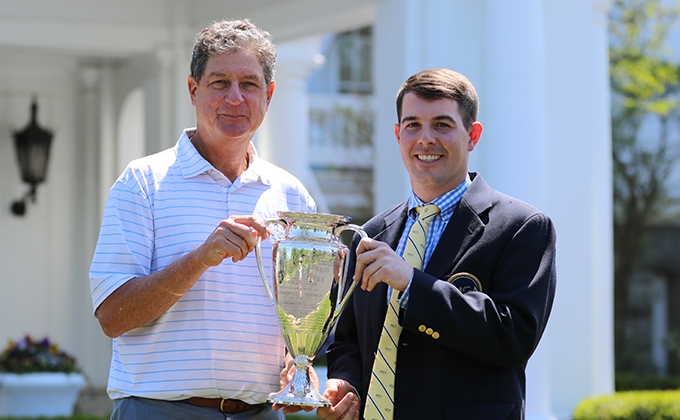 PURCHASE, N.Y. (May 8, 2018) – An even-par 70 propelled Adam Kugler of Alpine to victory on Tuesday in the 91st MGA Senior Amateur Championship at Old Oaks Country Club, as he came back from an eight-stroke deficit to claim the season’s first title.

Kugler began the day eight shots back after an opening round 78, which allowed him to make the cut on the number. Despite a pair of early bogeys on Tuesday, the 60-year-old strung together 11 consecutive pars before closing with birdies on two of the last three holes—a quick move up the leaderboard on what proved to be a challenging scoring day. At 8-over par for the championship, Kugler matched Gary Zenkel of Old Oaks who fired a 1-over 71 while playing in the second group of the day. However, Zenkel was unable to compete in a playoff due to a prior personal commitment, leaving Kugler as the victor.

First-round leader Ned Zachar of GlenArbor shot 79 in the final round, finishing tied for third with John Ervasti of Sleepy Hollow, who posted rounds of 73-76.

“Yesterday I just made a lot of mistakes,” said Kugler on the difference between his two rounds. “If you hit bad shots here, it’s very hard to salvage them and get up and down. Today I hit a lot of fairways, a lot of greens, and I hit a lot of lag puts.”

Kugler’s game has excelled at venues with challenging greens, a trend he credits to his experience at his home club of Alpine, where he won the Callaway MGA Senior Open in 2014. “You need to putt defensively here, which is very similar [to Alpine],” he said.

Entering the day eight shots back freed up Kugler’s swing and produced a remarkable come-from-behind victory. Aside from Zenkel’s 71, the next best score of the day was 75 from Jay Sessa of Gardiner’s Bay. “I was a little looser,” said Kugler. “And here you just have to hit the middle of greens and you have to be very conservative. If you start flying greens, forget it—you’re just not going to get up and down. You have to be patient.”

With the victory, Kugler matches Ervasti as the only other competitor to have won both the MGA Senior Amateur and Callaway MGA Senior Open. “I’m very proud of [winning both]. I’m glad that I could be competitive. This was a very unexpected victory. I barely made the cut yesterday and today was very good. I finished birdie-par-birdie, so I had no idea where the leaders stood. I assumed it was a respectable round, but I had no idea.”

Sessa’s rounds of 75-75 left him tied for fifth along with Jon Doppelt of Fresh Meadow (73-77) and Dave Scialabba of Meadow Brook (74-76). Tod Pike of Apawamis tallied rounds of 75-76 to finish in solo eighth at 11-over 151, while Craig Maerki of Bethpage, Dennis Lynch of Nassau Players and Joseph Casarella of Mohansic tied for ninth at 12-over 152.

The top 10 finishers earn exemptions in to this year’s Callaway MGA Senior Open Championship and the MGA Mid-Amateur Championship.