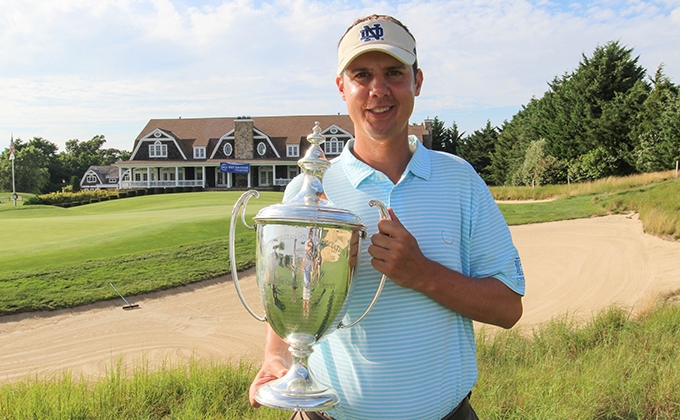 LAUREL, N.Y. (August 6, 2017) – Wins on two of the final three holes propelled Matt Mattare of Darlington to a 1-up victory over Bradley Lankler of Fiddler’s Elbow, Sunday in the 36-hole final of the 115th Met Amateur Championship at Laurel Links Country Club.

For Mattare, the victory provides a feeling of redemption following his runner-up finish in the championship in 2012 at Hollywood. “You never know whether you’re going to get that chance again,” said the 31-year old Mattare. “To be able to make it back here and get over the hump and get it done is just—it is an unbelievable feeling.”

The morning began with windy conditions, but Mattare—a 2008 graduate of Notre Dame—came out strong with a birdie on the par-five first. He continued steady play and took advantage of several early Lankler miscues to go 4-up through five. But, even with the early lead, Mattare knew there was a long way to go. “For 36 holes, you really have to block out what’s going on in the moment in terms of the big picture and focus on you the entire time,” he said. Mattare and Lankler displayed their skills all week long, as they were two of the four competitors that tied for low score of on-site qualifying with 1-over 143 totals.

Lankler—who tied fifth this year in Division III NCAAs for Franklin & Marshall and plans to turn professional—flipped the script on the early holes the second time out, as he won four of the first five holes—three with birdie. Mattare remained poised though, knowing a run would be coming from Lankler. “It’s not as if I took any sort of foot off the gas or didn’t think there’d be a charge, because I knew there would be,” said Mattare. “It’s just a matter of staying level-headed and calm the whole time.”

Lankler drained a 15-foot birdie putt on the par-three 12th regain a 1-up lead. While he had a close look just two holes later on the par-three 14th, the putt from inside five feet rimmed out and his advantage remained at 1-up.

With the door open, Mattare took advantage of his opportunities, first hitting a wedge to six feet for birdie to square the match on the par-four 16th. While Lankler’s tee shot found the water on the par-five 17th, he made bogey to put pressure on Mattare, who slid a birdie try eight feet past the hole. But, Mattare made a smooth stroke, holed the putt, and took the 1-up lead to the 36th hole.

Lankler had just outside 10 feet for birdie on the last, but his attempt slid by, leaving Mattare to make his three-footer for par and the victory.

“It’s all putting. At this level, everybody is really good and it’s who makes the putts and when,” expressed Mattare. “When he took the lead, he was making putts and when I took it back, I made two really big putts back-to-back and that’s what it all came down to.” The win continues Mattare's impressive season, which also includes a win a tie for second at the Ike Championship, a runner-up finish in the NJSGA Mid-Am and a recent win in the GAP Open. Mattare, who lives in Jersey City, N.J., also plays out of Saucon Valley Country Club in Bethlehem, Pa., where his father, Gene, is the director of golf and general manager.

Laurel Links proved to be a grand host for the 115th Met Amateur Championship, yielding a spectacular finish between two of the area’s top competitors. The field raved about its outstanding conditioning, layout, and support shown by members. As one would expect, Mattare especially appreciated the layout at Laurel Links, saying, “You can’t say enough good things. What’s really cool about the course is you can set it up a thousand different ways with how the green complexes are and the tees, and the wind—today was a completely different course.”