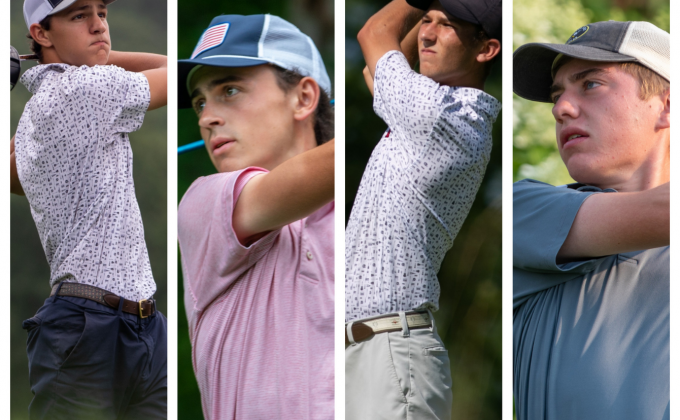 ELMSFORD, N.Y. (August 10, 2021) -- For the second year in a row, the MGA finished fourth at the Williamson Cup. After the 2020 competition was canceled due to COVID-19, the 57th Williamson Cup was held at the Country Club of Buffalo. Garrett Kessler of North Caldwell, N.J., carded the low 36-hole score of the tournament for the MGA, finishing second in the individual competition. Kessler's +4 was two behind medalist Marshall Meisel of the Washington Metropolitan Golf Association on a day where low scores were at a premium.

The MGA, represented by Kessler, Ben Loomis  of New Canaan, Conn., Colin Summers of Westfield, N.J., and Owen Walsh of Katonah, N.Y., came out strong in the morning wave. Kessler fired a +2, 72 and Loomis was two strokes behind with a 74. Overall the team found itself in a three-way tie for second with a combined score of 222 (top three scores from each team count towards the total score of the round).

In the afternoon the team found itself within striking distance of the eventual champions from the Washington Metropolitan Golf Association, but unfortunately their scoring slowed slightly towards the end of the 36 holes. Just five strokes separated the MGA from second place and a total of eight strokes separated second from first as the WMGA ran away with the team title.

Next year's venue is the Naval Academy Golf Course at the Club at Greenbury Point. The Washington Metropolitan Golf Association will act as the host club

Four of the Met Area's top junior players head to Buffalo, N.Y., this weekend in preparation for the 57th Williamson Cup, which the Buffalo District Golf Association will host at the Country Club of Buffalo on Monday August, 9 and Tuesday August 10.

The Williamson Cup is a highly regarded junior event, pitting 10 northeast golf associations against each other in a 36-hole stroke play format. Four juniors represent each association, with the best three scores from each round counting toward the team's overall score.

The MGA team has a strong history of winning the event, most recently claiming victory in 2015 when the event was contested at Saucon Valley Country Club. In 2017, 2019 Met Amateur champion Chris Gotterup of Little Silver, N.J., won the individual title at Pittsburgh Field Club. The MGA has brought the Williamson Cup home 11 times, second only to the Golf Association of Ontario's 12 victories. In recent history, the Western Pennsylvania Golf Association has been the team to beat, winning the last three Williamson Cups.

With the location of the event rotating among the participating golf associations, the MGA last hosted the event in 2013 at Sleepy Hollow.

With the tournament just around the corner, here is a deeper dive on the four golfers representing the Met Area this year: