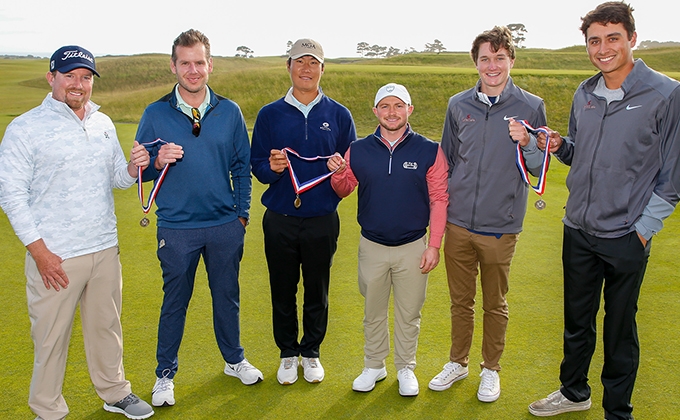 The Marlton, N.J., side faced a challenging duo in 2014 U.S. Mid-Amateur champion Scott Harvey and 2008 U.S. Mid-Amateur runner-up Todd Mitchell, who have competed in match play at the championship every year since the event's inception in 2015. Kwon and Vannucci claimed two holes on the day, winning the par-three 2nd and par-four 10th with birdies. However, their counterparts--both 40 years of age--built a strong 3-up advantage through the opening nine holes. While the pair won the 10th, the deficit stood as too much to overcome, with the final margin being 4-and-3.

BANDON, Ore. (May 28, 2019) -- MGA eClub member Vince Kwon and partner Troy Vannucci continued their run in the 5th U.S. Amateur Four-Ball, Tuesday on the Old Macdonald course at Bandon Dunes, picking up a pair of victories to advance to the semifinal round.

In the morning Round of 16, Kwon and Vannucci earned a 5-and-3 victory over Lake Charles, La., natives John Faulk and Matt Nicholas. The duo faced a one-hole deficit after the fourth hole, but would not drop another hole the rest of the way, instead winning Nos. 6, 8, 9, 12, and 14 en route to victory.

The afternoon's match placed the Marlton, N.J., side against 2017 U.S. Mid-Am champion Matt Parziale and his fellow Massachusetts native Herbie Aikens. Parziale and Aikens' first win of the day came on the par-three 8th, but Kwon and Vannucci won two of the next three to take a 3-up lead through 11. Their lead was trimmed to two once again, but a birdie on the par-five 15th and a tie with fours on No. 16 led to a 3-and-2 victory to secure a spot in Wednesday's semifinal round.

"Emotionally, ecstatic," remarked Kwon after the two-win day, as he and Vannucci became the first medalists to advance to the semifinals in the U.S. Amateur Four-Ball's brief history. "I didn't know we were going to get this far. But our confidence is way up there, and hopefully we can get the job done."

The duo will face a highly accomplished duo in 2014 U.S. Mid-Amateur champion Scott Harvey of Kernsville, N.C., and 2008 U.S. Mid-Amateur runner-up Todd Mitchell of Bloomington, Ill. The side has advanced to match play in every U.S. Amateur Four-Ball since the championship's inception in 2015, having also advanced to the semifinals in the inaugural event. The match begins at 10:20 a.m.

BANDON, Ore. (May 27, 2019) -- After claiming co-medalist honors over 36 holes of on-site qualifying in the 5th U.S. Amateur Four-Ball, MGA eClub member Vince Kwon and partner Troy Vannucci, both of Marlton, N.J., earned a 1-up victory, Monday on the Old Macdonald course at Bandon Dunes, to advance to the Round of 16.

In the weekend stroke-play qualifying, Kwon and Vannucci tallied 64s on both Old Macdonald and Pacific Dunes at Bandon Dunes en route to a stellar 13-under-par total and co-medalist honors with two other sides. Kwon had entered the championship playing well, having earned medalist honors in qualifying for the 64th Ike MGA Stroke Play Championship, May 20 at Engineers Country Club. Vannucci echoed that thought after the second round, "We've been playing well coming in. We were just trying to get settled in, calm the nerves and just hit shots. That's all you've got to do."

Kwon, 25, and Vannucci edged out a hard-fought victory in the Round of 32, defeating Auburn University teammates M. Tyler McKeever and Steven Groover, 1-up. McKeever and Groover took a 2-up advantage through four holes, but wins on Nos. 5 and 7 squared the match before five consecutive ties. Kwon and Vannucci claimed teh par-four 13th with birdie, while a birdie for their opponents on the par-five 17th squared the match once again. However, Vannucci knocked his approach from a fairway bunker to 25 feet and holed the uphill putt for victory. The duo faces Lake Charles, La., natives John Faulk and Matt Nicholas at 11:12 a.m. Eastern in the Round of 16.

Reigning MGA Junior Player of the Year Jack Wall of Brielle, N.J., and teammate Brendan Hansen of Spring Lake, N.J., also advanced to match play at Bandon Dunes. The duo, one of the youngest sides in the championship, carded rounds of 68-63, finishing tied for seventh at 10-under overall. However, the duo came up on the wrong side of a 21-hole match, as Brandon Cigna of Arlington, Va., and Ben Warnquist of Oldney, Md., claimed the match with birdie on the par-four 3rd hole.

Stewart Hagestad of Newport Beach, Calif., the 2016 MGA Player of the Year and U.S. Mid-Amateur champion, also advanced to the Round of 16 with partner Derek Busby of Ruston, La., with a 1-up victory. The duo earned the No. 6 seed after firing an 11-under total in qualifying.