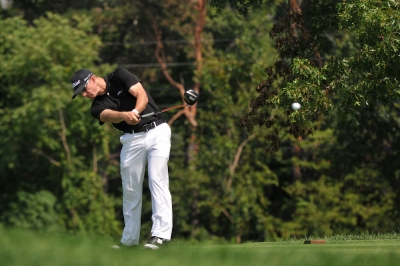 Carter Cup champion began the year without a consistent place to play professional golf and earn a paycheck. But after several successful Monday qualifying campaigns on the Web.com Tour, Hoffmann took advantage of the opportunities he created for himself and will now compete with the best golfers in the world in 2013.

Hoffmann's final round 7-under 64 at the Tour Championship (he finished T3) was not only the lowest score of the day, but it vaulted him into 19th place ($207,540) on the money list. The top 25 players on the Web.com Tour money list automatically qualify for the PGA Tour. The 23-year-old began the week No. 31 and played in only 13  Web.com Tour events (he's one of three players that got their cards to play in 13 events or less). In August, Hoffmann finished T2 at the Met Open at Plainfield Country Club in his home state of New Jersey.

Thanks to early season success, Andrew Svoboda didn't need a top finish like Hoffmann. The 2003 Met Open and 2004 Met Amateur winner recorded four top 10 finishes and 17 made cuts in 24 events to end the season No. 21 on the money list ($203,717). Svoboda, 33, was in the field this year at the MGA-conducted U.S. Open Sectional Qualifier at Canoe Brook Country Club.

2006 Ike champion Kevin Foley also had a tremendous showing in the Tour Championship. Foley shot a 6-under 65 in the final round to finish T13 and No. 52 on the money list ($119,202). He'll likely go to Q-School to try and earn full-time status on the PGA Tour.

Jim Herman, a former assistant professional at Trump National-Bedminster, will be making a return trip to the PGA Tour after finishing No. 25 on the money list.  The 34-year-old edged out Camilo Benedetti by less than $1,000 for the final spot. In 2011, Herman was a full-time member of the PGA Tour after he finished No. 19 on the 2010 Nationwide Tour money list. He earned a spot in the 2012 U.S. Open by finishing in the top 4 at the MGA-conducted U.S. Open Sectional at Canoe Book.