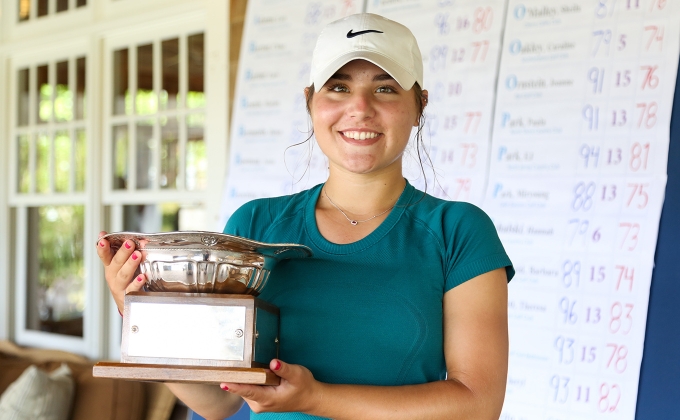 Diecidue had a bit of a rocky start to her round, making three bogeys on the first seven holes. Sitting at 2-over for the tournament, she knew remaining patient was paramount.

“I just stayed focused, I held true to the things I have been working on,” Diecidue explained. “I knew where I was, but I didn’t allow my score at that moment to affect my game and tried to stay in my routine for all 18 holes.”

After making bogey on the 7th hole, she would go on to birdie on the par-4 8th to make the turn at 1-over par for the tournament. After making a double on the par-3 10th, Diecidue would make three birdies coming in and play the final eight holes in even par.

After the round, Paige credited a lot of her success on the day to her putter.

“I felt really good putting out there,” Diecidue said. “The greens were beautiful and I felt really confident on them throughout the day.”

In the gross division, Anna Bowman of Suburban Golf Club and Emily Montagnino of Indian Hills Country Club finished just shy of Diecidue’s 3-over mark, shooting 5-over and 6-over respectively.

In the net division, there was a tie for first between three players who all finished at even par. After a match of cards to break the tie, Christine Choe of Lake Success Golf Course finished in first, followed by Maki Drake of Inwood Country Club in second and Sally Scranton of Southampton Golf Club in third.