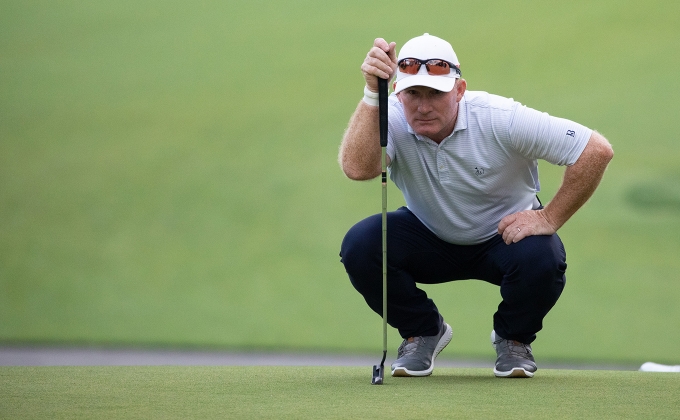 First-round leader Frank Bensel of Century made a charge up the leaderboard Wednesday with a 4-under 68. Though he started the day 11 shots back of eventual champion Omar Uresti, Bensel pulled within two shots at one point. The past Met Open champion finished solo second at 8-under for the championship, three shots behind Uresti.

Alex Beach of Westchester, the 2019 PGA Professional Championship winner, and Danny Balin of Fresh Meadow also made moves in the final round, shooting matching 2-under 70s to jump 22 and 26 spots up the leaderboard, respectively. Beach finished 1-under overall, tying sixth to earn his third entry into the PGA Championship. Balin's even-par total for the championship landed the past Met Open winner in a tie for eighth. Balin will make his eighth PGA Championship appearance and is 7-for-7 in finishing within the top 20 in the PGA Professional Championship.

Peter Ballo of Silvermine and Rob Labritz of GlenArbor also finished even-par to advance to Kiawah Island. Ballo opened the championship with a 6-over 78 on the Wanamaker Course, but bounced back to make the 36-hole cut with a 4-under 67 on the Ryder Course. Returning to the Wanamaker Course for the final  two rounds, Ballo carded rounds of 2-under 72 and even-par 70 to close out the championship. Labritz had used rounds of 69-70-72 to climb to 4-under through 54 holes. Despite a closing 4-over 76, Labritz, the low club professional from the 2018 PGA Championship at Bethpage Black, still secured his eighth start in a PGA Championship.

Ben Polland is another familiar name advancing to Kiawah Island. The former Deepdale professional and Met Open champion, now working out of Shooting Star in Wyoming, finished in solo fifth at 3-under.

UPDATE (April 27, 2021) -- Several Met Area professionals will aim to lock up a spot in this year's PGA Championship on Wednesday as the PGA Professional Championship comes to an end at PGA Golf Club in Port St. Lucie, Fla. The top 20 finishers earn a spot in the field at Kiawah Island, May 20-23.

Rob Labritz of GlenArbor and Frank Bensel of Century open the final round tied for fifth at 4-under for the championship. Tom Cooper of The Creek stands at 1-under thanks to his third round 68.

Peter Ballo of Silvermine also begins the final round inside the top-20, following back-to-back under-par scores that helped him climb the leaderboard. After an opening round 75, Ballo has carded rounds of 67 and 70 and is even-par overall.

Meanwhile, reigning PGA Professional Championship winner Alex Beach of Westchester begins the day at 1-over, as does 2020 Lexus MGA Senior Open winner Frank Esposito, Jr., of Forsgate. Also well within distance of cracking the top-20 are Jason Caron of Mill River, Reid Howey of Manhattan Woods and Danny Balin of Fresh Meadow, all at 2-over through 54 holes.

Peter Kampmann of Manhattan Woods and Danny Lewis of Hollywood also made the 54-hole cut and could also contend for top-20 finishes as they enter the final round at 3-over and 4-over, respectively.

UPDATE (April 26, 2021) -- A trio of Met Area professionals stand inside the top-10 of the 2021 PGA Professional Championship following 36 holes of play at PGA Golf Club in Port St. Lucie, Fla., while several more remain within striking distance heading into the final two rounds.

First-round leader Frank Bensel of Century followed up his opening round 65 with a 1-under 71 on the more challenging Wanamaker Course. He now trails 2017 PGA Professional Championship winner Omar Uresti but one shot.

Rob Labritz of GlenArbor carded a bogey-free 2-under 70 on the Wanamker Course. The round, which included bookend birdies on Nos. 1 and 18, moved Labritz to sixth place at 4-under par. Danny Balin of Fresh Meadow rounds out those in the top-10, following his even-par 72 on the Wanamaker Course.

Defending champion Alex Beach of Westchester and reigning Lexus MGA Senior Open winner Frank Esposito, Jr., of Forsgate are both 1-under through 36 holes, tied for 14th.

Reid Howey of Manhattan Woods and Peter Ballo of Silvermine were two of the day's biggest movers, carding rounds of 4-under 68 on the Wanamaker Course and 4-under 67 on the Ryder Course, respectively. Howey moved to even-par for the championship with his round and on Tuesday will play alongside Mill River's Jason Caron, who is also even-par.

Mike Meehan of Old Westbury, Danny Lewis of Hollywood enter round three tied 36th at 1-over, while Ballo, Matt Sita of Old Westbury and Peter Kampmann of Manhattan Woods stand at 2-over.

A 36-hole cut was made to the low 90 scores and ties, while a second cut will trim the field to the low 70 and ties for Wednesday's final round.

The top 20 finishers will earn a spot in this year's PGA Championship.

Past Met Open champion Frank Bensel of Century opened with 6-under 65, in which he carded nines of 33-32 and registered just one bogey as he opened play on the Ryder Course. Competitors will play 18 holes on both the Ryder Course and Wanamaker Course at PGA Golf Club before a cut to the low 90 scores and ties for the third round. A total of 58 players shot even-par or better in round one.

Bensel's round earned him a two-shot lead over four players, including 2019 PGA Professional Championship winner Alex Beach of Westchester Country Club, who is aiming to defend his title after the event was cancelled in 2020. Beach birdied Nos. 16-18 and 1 as he made the turn on the Ryder Course. He added two more birdies and a pair of bogeys en route to his 67. Former Deepdale professional and Met Open champion Ben Polland also opened the championship with a 4-under 67.

Danny Balin of Fresh Meadow, yet another past Met Open champion, used five birdies and a pair of bogeys to shoot 3-under 68 on the Ryder Course.

Kent St. Charles of Westchester Hills stood 2-over with four holes to play as he opened on the Ryder Course, but an eagle on the par-5 sixth hole and back-to-back closing birdies propelled the 32-year-old to 1 2-under 69. Rob Labritz of GlenArbor carded an impressive six birdies, but added four bogeys to also post 2-under 69 on the Ryder Course. Meanwhile, Danny Lewis of Hollywood tied for the second-best score of the day on the Wanamaker Course, registering an eagle, a pair of birdies and two bogeys for a 2-under 70.

Reigning PGA Professional Player of the Year and 2020 Long Island Open champion Jason Caron of Mill River, John Dipilato, Jr., of Century, Dylan Newman of Brae Burn, and Del Ponchock of Hudson National all posted rounds of even-par, Sunday. Caron was the lone player of the quartet that played the Wanamaker Course, with his round highlighted by a hole-in-one on the 179-yard par-3 sixth hole. Newman is aiming to continue his success at PGA Golf Club, where in December he finished as the top money winner in the six-event PGA Tournament Series. Newman, Balin and Labritz all won titles during the series.